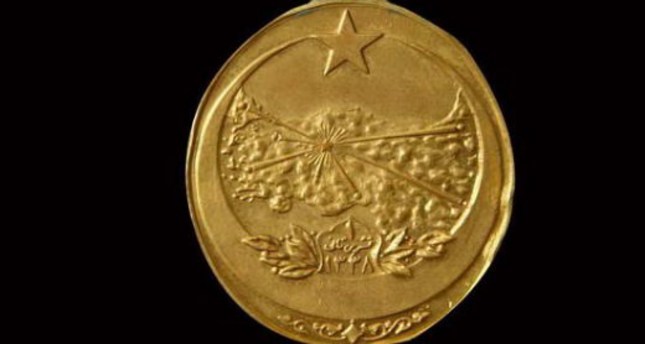 by AA
Nov 17, 2014 12:00 am
A 26-year-old university student, Çağrı Doğan, has created a big collection of war medals that he picked up from various countries.

Having started to collect different medals and decorations belonging to the Ottoman and Republic periods when he was 15, Doğan said his interest in history turned into war medal collection over time. Speaking to AA, Doğan said that he has enlarged his collection with "Medjidie" and "Ottoman" decorations and that the most important part of his collection includes medals and rosettes dating back to World War I whose centenary is commemorated this year.

Doğan said that when creating the collection, he realized many different Gallipoli Stars (Ottoman war medal) are sold at auctions abroad, and added: "Ninety percent of the medals and decorations in my collection consist of pieces that I have bought at auctions abroad. I have attended different auctions in Germany, Austria, England, France, the U.S. and Canada. I brought these medals to our country. Many medals and decorations are still on sale or expected to be put up for sale in those countries."

Noting that he has brought approximately 300 medals to Turkey having significance to the country, Doğan said that he began collecting medals and decorations presented to foreign soldiers who fought in wars with the Ottoman Empire. Doğan added that some foreign soldiers, who did not like the appearance of the war medals given by the Ottoman Empire, had special jewelers make more beautiful and enameled medals.

Pointing out that German and Austrian companies made such medals during that period, Doğan said that he has so far seen almost 40 Gallipoli Stars created in this way.

He said the process of bringing the pieces to Turkey after buying them at auctions has been quite challenging: "We cannot clear Ottoman medals through customs. We pay a bank charge that is 25-30 percent of the total amount when buying pieces at auctions or online marketplaces. Delivery costs are 50-100 euros. In addition to these costs, customs charges are high. However, in accordance with law no. 2863 on Conservation of Cultural and Natural Assets, it is free to bring such pieces bought abroad to Turkey. However, we still face such serious difficulties in customs that some custom officials have even sent back a medal or decoration, which we purchased to bring to our country, to its country of origin. Even though you pay these fees, some custom officials still do not allow these pieces to enter the country and have no knowledge on the issue. This is the main problem that many collectors have long been suffering from. It is seen as an offense to save and bring these pieces, which had been smuggled from Turkey, back to this country. Therefore, we demand that we pay nothing or a small amount for these pieces in customs."