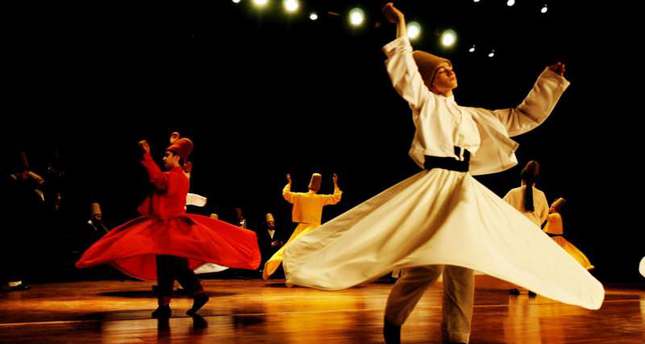 Commemorating the 741st anniversary of Rumi’s passing, the event known as Şeb-i Arus (the wedding night), will take place in Konya from Dec. 7 to Dec. 17 where you can visit historical streets, mosques and museums in this spiritual city during celeb

It has been 741 years since Mevlana (Rumi) passed away. Every year, from Dec. 7-17, commemoration ceremonies are held for him in Konya. This year's commemorations include Şeb-i Arus ceremonies (the wedding night), which are attended by thousands of people from around the world, poetry and Mawlavi readings and conferences along with numerous other events. Konya, a spiritual center, is home to the tomb of Mevlana, who continues to inspire not only Turks and Muslims, but also people around the world regardless of their religion. Every year, the city welcomes millions from around the world, especially during the Mevlana commemoration and meeting ceremonies. Dec. 17 is also considered as the death and rebirth date of Mevlana because he returned to his creator, God, when he died. "The day I die is my wedding day," Mevlana said, naming his own date of death "Şeb-i Arus," Persian for wedding night. Like every year, this year's commemoration ceremonies feature Mevlana and poetry readings, sema rituals, photography competitions, exhibitions, conferences and concerts. Co-organized by the Konya Provincial Directorate of Culture and Tourism, Konya Metropolitan University, nongovernmental organizations, universities and experts, the events will offer a road map for a better understanding of Mevlana's spiritual world. In order to discover a city that is as spiritual as Konya, one should take a journey like a modern Evliya Çelebi, a Turkish wanderer, and visit the narrow historical streets, mosques and museums in order to relive its thousands of years of history before tasting its traditional foods.

Mosques and Tombs: It is a necessity to pay a visit to the tombs of important Islamic figures such as Bahaeddin Veled, Mevlana, Sadr al-Din al-Qunawi, Hadimi, Sultan Walad, Hoca Cihan, Sadır Sultan, Pirebi Sultan, Ahmed Eflaki, Sarı Yakup, Nasreddin, Yunus Emre, Al-Baghawi, Beyhekim, and Hacı Veyissade Mustafa Efendi. Perhaps the Tomb of Mevlana is the most important one among them, however. The building, which was originally built as Mevlana's dervish lodge, has been open since 1926. Known as the Green Dome, the dervish lodge was built on four elephant feet over 18,000 square meters and includes a museum and courtyard. The next stop on your Konya trip should be the mosque and tomb of Shams Tabrizi – Mevlana's friend and confidant. You should also visit the Selimiye, Alaaddin, İplikçi, Azize, Kapu and Sahibata mosques, which are accompanied by the sounds of pigeons. While walking around Konya, which was the capital city of the Seljuks, do not overlook small mosques such as Nakiboğlu, Hacı İvaz, Tavus Baba, Araplar Ak Camii, İnce Minare, Sırçalı, Celaliyye, Konevi, Amber Reis, Hatuniye, Şems and Şekerfuruş.

Bazaars: Although Konya is a metropolis, bazaars and old shopkeepers still preserve their historical features. You can encounter the colorful worlds of local shoemakers, coppersmiths, drapers and craftsmen who specialized in marbling, calligraphy and coin-making around Kapu Mosque, Aziziye, Bedesten (covered bazaar) and Çıkrıkçılar İçi.

Libraries: If you want to learn more about the literary culture of Konya, we recommend you visit the Yusuf Ağa, Beyhekim, Koyunoğlu and Konya Public libraries.

Churches: Located 7 kilometers from the city center, Sille village resembles a history book. Besides the historical fabric of the village, you should visit the Greek Orthodox church of Agia Eleni, which was built in 1833.

Museums: We recommend you visit the Archeology, Ethnography, Koyunoğlu, Karatay, Sırçalı, İnce Minare and Hümayun museums if you are interested in Konya's rich history and cultural heritage.

It is possible find a hotel in every corner of Konya. However, keep in mind that the prices are very high during the Şeb-i Arus celebrations.

Many tour companies capitalize on the Şeb-i Arus celebrations and organize trips to Konya. These tours mostly focus on the spiritual aspect of the festival and offer trips to the heart of Konya with a variety of vehicles and options.