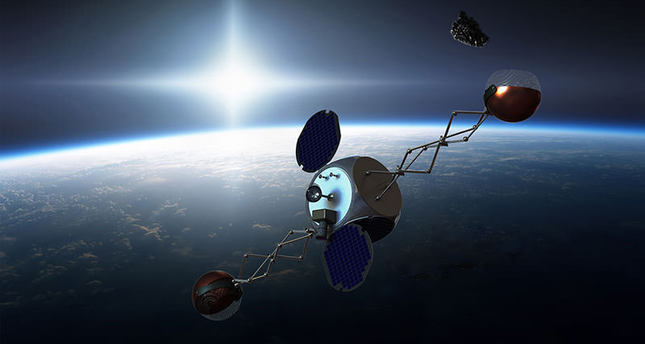 by AA Dec 05, 2014 12:00 am
"This is the most interesting thing that I will ever experience in my life," says 42-year-old Ercan Kaygısız, who is expected to make an epic journey to the heavens next year.

Kaygısız is among the eight Turkish tourists who applied to make the trip to space from Turkey, to experience seven minutes of zero gravity.

They are expected to depart at the end of 2015, according to an official from the company organizing the trip. The intrepid tourists are set to take off from a special "spaceport" on Curacao Island in the Caribbean. Along with the pilot, there will be only one seated passenger for each trip in the spacecraft.

"Test flights will be made at the start of next year and the trips are expected to be made at the end of 2015," said California-based XCOR Aerospace Turkish representative Ceylan Pirinçcioğlu.

While the allure of space travel has become quite popular in recent years, the thought had never crossed the mind of Kaygısız, a driver in the western Izmir province.

"Space has never drawn me so far. Everything started when I bought a heater, which made me join a sweepstake," he explains.

He won the chance to travel to space last year. "I never expected to win the sweepstake," he says.

"Now, I have a chance like this and I want to enjoy it and make history."

He is not a person, who travels much, he says. The Turkish Republic of Northern Cyprus is his only overseas experience.

He has interesting plans for his travel outside the atmosphere.

"As a Turk, I am planning to take a Turkish flag, a Quran and prayer rug with me. If I can find an opportunity, I will pray there to thank God."

On October 31, Virgin Galactic's passenger craft SpaceShipTwo crashed in the California desert, killing a co-pilot and injuring another one.

The accident happened as it was undergoing a powered test flight. It was generally seen as blow to touristic space travel.

"In order to prevent any danger, every kind of work is being done," XCOR Aerospace representative said. "There are definitely some lessons that we should take from the Virgin crash."

Some cancelled their participation in the XCOR adventure following the crash. But not Kaygısız. "I am a brave person," he says.

"Life is already full of risks," he goes on. "You don't know what you will experience five minutes later in life. So, I don't feel any fear."

Ahu Aysal Kerimoğlu, who is also one of the eight Turkish space tourists, agrees.

"I am quite comfortable and looking forward to having this trip... I am not afraid of anything," she says.

Travelling to space is this 57 year-old travel lover's childhood dream.

"I was always wondering of how I could go there since my early days," Kerimoğlu, who is also a business woman, says. "As it is cheaper right now, there is no reason not to go there."

During the one-hour trip, the spacecraft will take off and land vertically using its reusable rocket propulsion system, with organizers saying the craft will reach speeds of 3,564 km/h around four minutes after take-off.