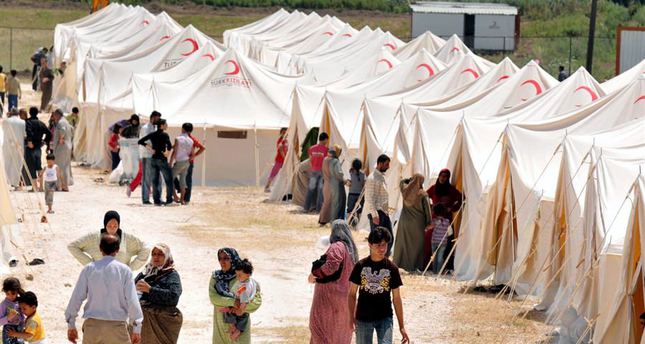 by Daily Sabah Dec 05, 2014 12:00 am
The United Nations' World Food Program (WFP) has launched a 72-hour social media campaign to raise $64 million for Syrian refugees. The social media campaign comes two days after the U.N. body announced it would suspend its food voucher program for Syrian refugees in Jordan, Lebanon, Turkey and Egypt, affecting nearly 1.7 million people. Early in December, the U.N. decided to cancel its decision due to lack of sufficient resources. For the last four years, millions of Syrians have fled war and taken shelter in neighboring countries – notably Turkey, as well as Lebanon, Egypt, Iraq and Jordan. The WFP has distributed electronic tickets to Syrian refugees in camps so that they can buy food at markets. Ertharin Cousin, the WFP Executive Director, said that most of the donations promised have not been forthcoming. The situation does not only place Syrian refugees in difficulties, but also creates social problems such as lack of tolerance towards them in the countries which shoulder this burden.

The money will be used to fund food vouchers for the refugees for the month of December. For refugees who are already struggling to survive the harsh winter, the consequences of halting this crucial assistance is devastating. The three-day campaign urges the public to donate at least $1. "All it takes is $1 from 64 million people," the program's Executive Director Ertharin Cousin said. "Even one dollar can make a difference. We're saying to people, 'For you it's a dollar, for them it's a lifeline.' We know that people care, and we are asking them to show it, by giving even this small amount to Syrians in need," Cousin added. Since the Syrian conflict erupted in 2011, the food program has provided food assistance to millions of displaced people.