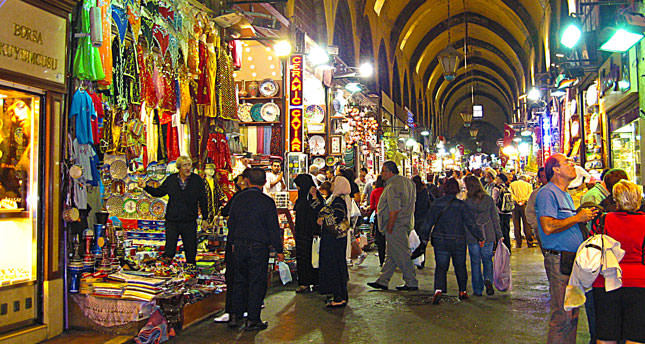 Why not join in a different kind of shopping frenzy to buy your presents for Christmas from one of the oldest shopping centers in the world. You guessed it. The Grand Bazaar

As you make your way around the city in preparation for Christmas and the New Year don't forget that Istanbul is host to one of the world's oldest and largest shopping centers by way of the Grand Bazaar (Kapalıçarsı). What was once the ultimate destination for merchants and shoppers, the Grand Bazaar is now experiencing a revival with a series of creative, authentic and unique stores that offer the ultimate selection for truly unexpected holiday gifts.

With 61 covered streets and 3,000 stores, this 15th-century bazaar was selected by "Travel and Leisure" as the world's no. 1 tourist destination last month, with 91,250,000 annual visitors. The bazaar was created by the clustering of shops each specializing in their own craft and the subsequent connected doming of these streets, creating a maze-like labyrinth of pathways devoted to specific crafts such as jewelry, leather, rugs, textiles and antiques. With literally thousands of options to choose from, the following is a list of the cream of the crop for the best gift shopping this city has offer.
There are a number of very important shops to visit before you even enter the Grand Bazaar approaching the Nuruosmaniye entrance, namely the flagship store of Sevan Bıçakçı, Turkey's most famous jewelry designer, located in Kutlu Han. Known as the "King of Rings," Bıçakçı uses a micro-mosaic technique to create astonishingly intricate original designs inspired by Istanbul. These magnificent pieces of wearable art have adorned countless famous figures and are sold in some of the world's most prestigious retailers including Barney's, Stanley Korshak and Maxfield. Yet another up-and-coming Turkish jewelry designer Arman Suciyan, who has worked alongside renowned British jeweler Stephen Webster for years and was the winner of the 2013 Elle Style Awards, has a shop in the Cam Han on Fenari Sokak displaying his mystical and ethereal designs.
Sofa Art & Antiques, located just before the Nuruosmaniye courtyard, is the ultimate address for antiques, art, prints, calligraphy, Ottoman miniatures, sculptures, textiles, books and much, much more.

Once you enter the Grand Bazaar through the Nuruosmaniye Gate, you will find yourself on Kalpakçılar Caddesi, which runs across to the Beyazıt entrance. Easily the Grand Bazaar's longest and busiest street, Kalpakçılar is where jewelry is sold, gold to be more precise, and rents for these closet-sized stalls can reach anywhere up to $80,000 a year. Not only are the impressively shiny storefronts of gold a popular stop for tourists worldwide but they still remain to be an important destination for Turks purchasing gold bracelets or coins to give as gifts at weddings, which continues to be a steadfast tradition in Turkey.

Kafkas, one of Istanbul's top jewelry shop chains with branches in both the fancy Nişantaşı shopping neighborhood as well as in the prestigious Zorlu Center in Istanbul's high-rise district, has two neighboring shops making it a cornerstone amonggold and jewelry vendors in the bazaar.
Head into the heart of the bazaar by turning right and enter into the "Inner Bazaar" (İç Bedestan), the center and oldest section of the closed market. Also known as the Cevahir (Jewelry) Bedestan, this area has housed the most precious items in the market throughout history and was the site where slaves were auctioned up until the mid-19th century. Now, there are dozens of antique shops housing precious remnants of Byzantine and Ottoman history and traditional artifacts from Turkey's neighboring nations.

L'orient Handicrafts is one such tiny store that houses volumes of antiques and cultural treasures including Turkey's finest collection of Karagöz puppets and has even been mentioned in The New York Times and The Herald Tribune. Serhat Geridönmez creates beautiful jewelry reproductions of Hellenistic, Roman and Byzantine pieces. İznik Classics sells traditional and contemporary style İznik china while Minyatür Deniz Eskisi is packed with antique miniature nautical items. Tesbihçi Cemil ve Kadir Karateke has an incredible selection of tesbih prayer beads, Nick's Calligraphy Corner specializes in hand painted and calligraphy works of art on dried leaves and Bagus has a wide selection of affordable ethnic jewelry imported from Africa, Nepal and India.

On the parallel Halıcılar Street there are a number of beautiful new design shops with a wide variety of options for Christmas gifts such as Abdulla, a store devoted to the hamam bathing culture that sells fluffy towels and soft peştamal wraps as well as natural soaps, scrub brushes and bedding. Derviş also sells equally beautiful natural textiles and bath products in their two locations in the Grand Bazaar.

Cocoon are the purveyors of felt hats and Central Asian antique costumes and textiles and have four branches in Sultanahmet. In addition to displaying rows and rows of unique felt hats in every color imaginable, they also sell clothing pillows, handbags, shoes and other gift items. Cambaz sells creative handmade souvenirs and Christmas decorations as well as gifts for children. While still on Halıcılar Street, take a break at Fes Café, now a landmark for being the first café to serve real espresso in the Grand Bazaar!

Head to Takkeciler Street to check out the beautiful and innovative designs of Dhoku Carpets and their sister store Ethnicon, the pioneers of the modern take on traditional Turkish carpets, spanning from patchwork rugs to modern, colorful kilims. On the same street, Yazzma sells stunning house ware textiles in the form of tablecloths, runners, pillows and basically anything that could utilize ethnic fabric. Harun Bags on Perdahcılar, is the perfect location to buy a colorful textile bag.

From there head to Gani Çelebi to visit AK Gümüş, which specializes in Central Asian tribal arts and has countless gift options of jewelry and trinkets. The perfect spot to refuel is Havuzlu, a tradesman restaurant that has been operating since 1960. This popular lunch spot, has both indoor and outdoor seating and serves up doner kebab and home cooking dishes

Moving on to Yağlıkçılar Street, pay a visit to Yazmacı Necdet Danış for the ultimate in top-quality textiles sourced from all over the world. In addition to rolls and rolls of textiles, this store and the neighboring Nurem also sell scarves, wraps and other gifts involving Turkey's unique fabrics. Nesim Folklore Shoes on the same street sells all forms of traditional leather sandals, slippers, and shoes in every color imaginable. Nearby is Army of Love, perhaps the most unexpected store in the bazaar, which sells old and redesigned military jackets and memorabilia from all over the world.

Located in Zincirli Han, Şişko Osman is widely considered to be the aficionado on Turkish rugs and kilims, while Imperio Otomano is another carpet-lover's favorite and is where Ben Affleck famously purchased a few while filming Fargo. Head to Kurkçular for leather and more specifically Koç Deri, which have the best selection of leather coats on offer. Last but not least is Mavi Köşe, a long-standing favorite treasure trove of sorts with invaluable goodies and the history to prove it. Having been around for half a century, this shop is a favorite to many for having some of the world's most interesting and one-of-a-kind antique findings.