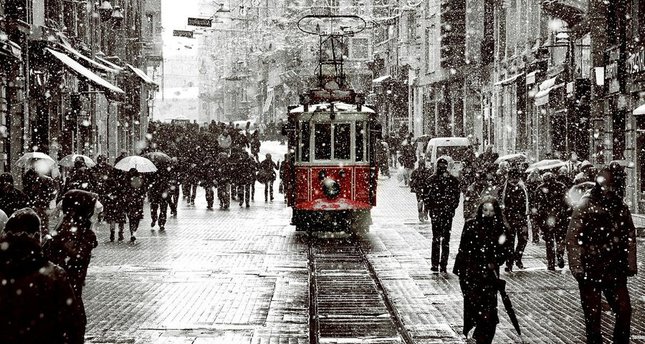 As the chilly weather of winter closes in on us, with its flu season and nights spent trying to warm up at home, there are a number of idiosyncrasies that exist in Turkey that go against the grain to many expats. Here is what to do, what to heed and how to proceed in Turkish winter

Turks understandably have a wide variety of superstitions and premonitions, after all this is the nation of the nazar boncuk – the blue glass beads that protect against the evil eye. Best described as old wives' tales, these rules to live by may seem strange to foreigners who have chosen to make Turkey their home. Not only are these finer points that foreigners need to learn about, but also there may be some truth to the beliefs that seem bizarre to the expat eye.

Perhaps one of the greatest challenges for foreigners in Turkey is the Turk's aversion to drafts. Turks widely believe that getting caught in a draft, from an open window at home or in a car, or even worse, a fan or air conditioner, is the cause of a number of ailments spanning from the common cold to muscle cramps as well as the elusive and very frightening facial paralysis.

During the summer, this issue is tantamount to torture, as Turks would rather perspire, which many foreigners may have noticed, rather than be stuck in any sort of draft in which they risk catching a cold. Most noticeable in public transport, I cannot count the number of times I have vied for a seat next to a window for any sort of breeze, only to have that window promptly shut by someone and the move vocally approved of by the surrounding passengers. Foreigners can also be outnumbered in gyms where opening a window or turning on an air conditioner when people are actively sweating is considered to be the most illogical thing to do by Turks. For them, it is believed that it could lead to poor health and colds, even while you are striving to become healthier by working out.

Most Turks do not like air conditioning whatsoever and a fan can be considered a danger if its breeze comes into direct contact with a person. My greatest personal strife in the summer is the "cold war" I have at home surrounding my fan. I need the fan to be on in order to fall asleep, yet my partner waits until I have done so to turn it off. Then I awake in an overheated frenzy and turn it back on – since now he has fallen asleep – only to wake up in a pool of sweat because he has turned it off once again by the morning.

Now in winter, a fan would be considered preposterous, never mind fresh air circulating indoors when the cold weather season hits. Turks like to keep their homes warm in the winter, and not just to a tolerable level of cold, but rather more like an intolerable level of hot. So, the draft issue comes into play even in winter as expats could be faced with an uncomfortably hot environment resulting in the need for an open window.

I personally have never known anyone to experience the elusive face paralysis or even a headache from an open window. However, there is a form of paralysis known as Bell's palsy, which results due to inflammation of a facial nerve and can indeed be caused by exposure to a cold breeze – a scary, but true fact.

So, although there may be a bit of truth behind this steadfast aversion to drafts, the lack of air ventilation at a time when germs are rampant, especially in homes with children, still seems to pose more of a health risk than not. However, this is just one of a number of cultural divides when it comes to child rearing, the most significant of which is the issue of swaddling. In Turkey, a whopping 93.1 percent of babies are swaddled. Now, this is all good and fine and this age-old practice is seeing a comeback, but it is not necessarily the way expat mothers may choose to clothe their child in Turkey. Perhaps one of the greatest issues faced by foreign mothers in Turkey is the fact that this practice is so wide-spread, which means that Turks will regularly vocalize their surprise and even disdain when they see a baby that isn't bundled up from head to toe. Many foreign mothers has had to contend with comments from friends, family and even strangers criticizing them for how they dress their child, which only multiplies exponentially when the winter arrives.

Have you also noticed that suddenly restaurants no longer have ice in winter? Well, that is because Turks do not like to drink anything cold once the weather has turned. In all honesty, many Turks will not drink cold beverages on principle and will certainly not allow their children to do so. But when the winter months come, suddenly ice disappears in restaurants, drink refrigerators in small markets (bakkals) are unplugged and ice cream becomes nearly non-existent – although I must admit that this is changing in big cities that have imported ice cream brands. Turks also have a long-standing belief that you should not drink something cold after you have consumed something hot, the reason being that anything cold or shocking to the system as such will result in a cold, sore throat or even sinusitis.

There is a saying in Turkish "ayağını sıcak tut başını serin," which means keep your feet warm and your head cool. Although Turks are perhaps the biggest consumers of house slippers and many will have numerous extra pairs on hand for guests – since taking off your shoes before entering a home is the norm in Turkey –it is nearly unacceptable to refuse slippers handed to you in the winter. Not wearing socks is also a near sacrilege, as there is the widespread belief that if a female in particularly goes barefoot, then she may end up infertile. The same belief goes for sitting on stone, cement or any sort of surface that could be cold, which is assumed to cause aches, pains and even possibly kidney or ovarian cramps.

As for keeping your head cool, this must be in reference to your state of mind because there are a vast number of beliefs surrounding wet hair in winter. Sleeping with wet hair can also cause a number of ailments according to Turks, ranging from colds and sinusitis to mastitis or even kidney stones.

There is a belief in Turkey that if a cat curls up at home for extended periods of time, then the winter ahead will be a long one. Well, this is all good and fine except for the fact that Turks also believe that cat fur in the throat can cause cysts.

There are also the sayings that if the rose hip or quince harvest is good, then winter will be a harsh one. Now, it is up to you to decide whether these premonitions are old wives' tales or sound advice; however, the vast amounts of quinces on the fruit stands around the country make me a believer that we may indeed have a long, cold winter ahead of us.