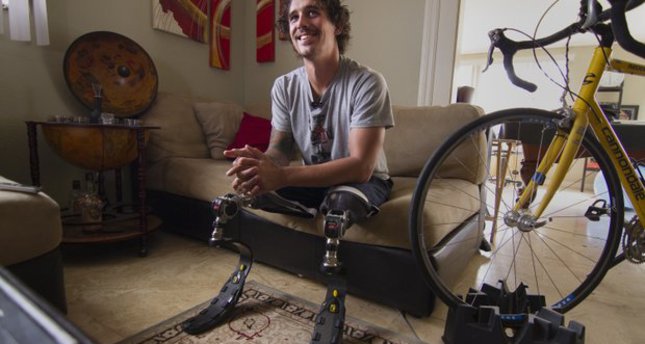 by AA Dec 20, 2014 12:00 am
"I've never experienced proper sensation my entire life." Forty-year-old Hasan Akdağ is a Turkish accountant, legless from birth, who suffers from very little feeling in his hands. Born with a rare condition known as congenital amputation, Akdağ is missing both legs below the knee.

"I don't know the shapes of objects when I close my eyes. For example, I cannot move when the lights are turned off, as I have very little sensation in my body," he said. But one Istanbul scientist now claims that within two years a revolutionary "smart" skin could restore touch, feeling and sensation to people with prosthetic limbs.

Utku Büyükşahin, 35, an assistant professor in the Mechatronics Engineering Department of Yıldız Technical University in Istanbul has developed a silicon-based, "smart" artificial skin that can function like the real thing.

It can sense touch, pressure and even temperature and can also stretch like natural skin.

Büyükşahin displays a prototype made of silicon and fiber-optic cables that sends signals to a computer by detecting every sensation when touched.

Having already tested the design over prosthetic limbs, Büyükşahin now wants to eventually graft the replica skin onto humans where it can send signals to the brain.

"More sensors mean more sensation in different spots," he said, adding that the sensitivity of the skin can be adjusted depending on need.

However, the struggle to fund this groundbreaking research has seen the scientist working without a laboratory or research team: "When I resolve financial problems, I believe [amputees] will be able to use it within two years," Büyükşahin said.

The academic first started developing the project five years ago, but the focus at that time was on providing artificial skin for robots. A chance encounter, however, inspired Büyükşahin to make the idea work for humans.

"I saw a young disabled man on a bus, aged in his 20s, who had a prosthetic arm. He sat in front of me for around 30 minutes. After watching him, I started thinking of how I could start human-related research," he said.

People who have suffered the trauma of amputation or missing limbs are excited about Büyükşahin's research.

"When someone taps my left arm, I don't feel anything. It is sometimes a joke among my friends," said Mükerrem Mese, who works as a secretary in the northern province of Kastamonu.

Mese, 27, was born without a left ar4m. "I would definitely want to use [artificial skin]," she said.

"I would surely want to sense touch, temperature and everything just like my other, healthy arm."

Mehmet Çılgın, who was a fireman in northern Turkey, had his left leg amputated after it became trapped in a fire ladder while he was extinguishing a blaze in 2006.

"It is like false teeth. There is no sensation in my leg. I really want to feel again," the 47-year-old said. He now works as a telephone operator. Yavuz Kavlak, 29, lost his right arm in a traffic accident when he was four-years old. He described everyday practical problems as well as the lack of sensation.

"I cannot button my shirt. I cannot wear whatever I want, especially short-sleeved t-shirts," Kavlak, now a civil servant at the Directorate of National Education in central Turkish city of Çankırı, said.

"If you haven't experienced a loss of sensation, you will not understand exactly what it means," Büyükşahin said.

In May, the researcher suffered an accident of his own when he slashed two fingers in a metal cutting machine while working – temporarily losing sensation in one digit.

Büyükşahin is now working hard to make the "smart" skin available to amputees immediately. "Every day that passes when I cannot push forward this project increases my embarrassment. People need this."

If his dream becomes a reality amputees with robotic prosthetics covered with the artificial skin could potentially be able to button their shirts, use a keyboard or hold soft materials like grapes thanks to the increased sensation.

The artificial skin not only has the potential to be used by amputees, but also by space or surgical robots to accomplish difficult tasks.

But it is in restoring one of human being's basic senses – that of touch – where this revolutionary smart skin comes into its own. Time will tell if it can make the leap from science fiction to everyday reality.