Inmates at Kütahya prison learn to make tiles in workshops 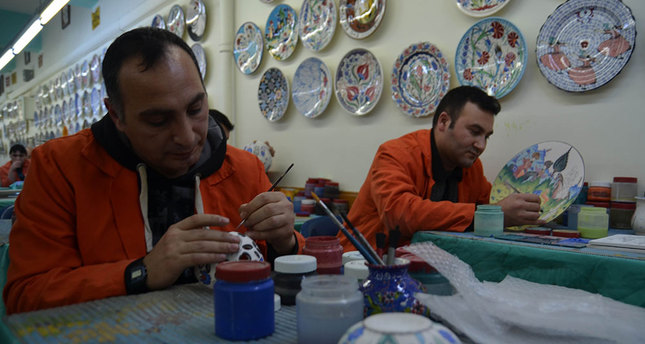 Stating that the training is provided by six staff members, Demiralp added: "The purpose of our institution is not to produce. It is to endear art to the convicts, to instill them with self-confidence and to reintegrate them into society."

Demiralp noted that similar workshops have started to be set up in other prisons in Turkey, adding: "These workshops provide great benefit in reintegrating people into society. We have exhibited the final works of our imprisoned friends in about 10 cities in Turkey and in international fairs. The prisoner is involved in the whole process starting from the soil stage to the last stage. They are insured for any accidents and earn money while creating pieces of art. Some of them send the money they earn to their children. In addition, this will help them find a job after they have been released from prison. The number of people learning tile making in the prison atelier in a year is about 500 to 600. Our target is to attend some fairs held abroad in accordance with the work of our ministry."

Chief of operations in the prison atelier, Murat Çetin, said that he has been working in prison for 20 years and has been the manager of the tile workshop for the past 16 years.

Stating that he has trained more than 5,000 inmates over the years, Çetin added: "At present 80 inmates are learning tile making. After two to three months of training, we place them in different units according to their abilities. Working in these units, inmates both value their time and have the chance to acquire a profession after serving their time in prison. Some of our trainees have even opened a tile workshop after leaving prison. Many people earn their keep practicing this job."