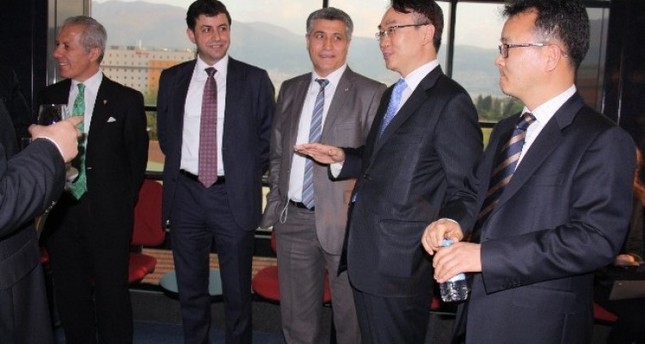 by AA Dec 24, 2014 12:00 am
Two young adventurers who set off from Seoul, South Korea, settled down in Bursa province of Turkey after traveling 12 countries. Jong Kim, 26, and his girlfriend Sujin Lee, 26, opened a "halal Korean restaurant" in Bursa for Turkish people. The South Korean duo have many Turkish interests like playing backgammon, fishing, Karagöz (one of the lead characters of the traditional Turkish shadow play), Turkish baths, the way the Turks give directions, chicken shish, hot spicy tomato dip, baklava, içili köfte, menemen, Bursaspor(the local football team) and Bursaspor's coach Şenol Güneş who was then manager of Seoul FC.

Dropping out from university to follow his dream of travelling the world, Kim visited 12 countries such as Vietnam, Cambodia and Iran. He and his girlfriend got on the plane only once and traveled the rest of the 6,000 kilometers by motorcycle.

Nearly a year ago, Kim and Lee crossed the border from Iran Gürbulak border gate and toured Ağrı, Erzurum, Trabzon, Giresun, Samsun, Ankara, Antalya, Denizli, İzmir and Istanbul by hitchhiking. The young Koreans who lived in Istanbul for a month sold Korean food in Sultanahmet by displaying posters that depicted their journey. Upon the request of his Korean culture admirer Turkish friend, Kim decided to settle down in Bursa to open a "halal Korean restaurant."

Kim said that he decided to stay in Turkey as he loves the country as well as its people. "I am most impressed by Turkish people and their hospitality in Turkey," stated Kim. "I do not know how to say it in Turkish but they are very warmhearted people. I have no idea how they treat themselves but they are hospitable to foreigners," he continued. He said they have not once encountered a bad situation as they hitchhicked adding, "The track drivers always asked as whether we were hungry or not; the first Turkish words that I learnt were 'çay' (tea), 'yemek' (food) and 'ekmek' (bread)." He also noted that his girlfriend Lee cooks menemen and sigara böreği (deep fried rolls with cheese filling) very well.

Kim further said that he loves Bursaspor's coach Şenol Güneş who also managed Seoul FC back in the days and helped the team win the championship in South Korea. He stated that he loves to play and watch football. "When I was residing in Seoul, I supported Seoul FC and now, I support Bursaspor since I am living here," Kim noted. He concluded by saying that he loves Güneş and hopes to meet him one day.