A guide to celebrating New Year’s Eve in Istanbul 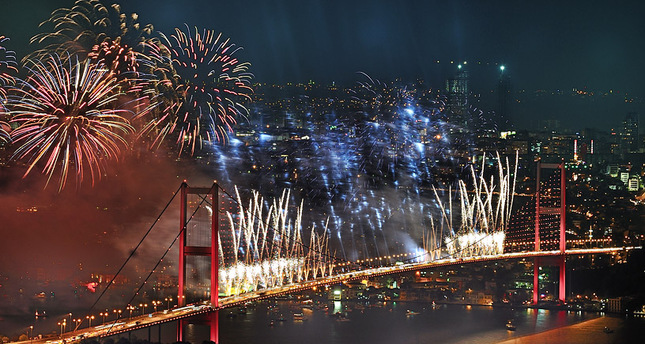 There’s a saying in Turkish that goes ‘seneye nasıl girerseniz o şekilde devam eder,’ which means ‘how you enter the New Year will be the way it continues.’ Therefore, it is easy to understand that Turks love to ring in New Year’s by celebrating!

For Turks, New Year's Eve, which they refer to as "Noel," is a time to decorate trees, homes and even streets, to enjoy a turkey feast and to give gifts to loved ones. In Istanbul and many cities around Turkey on New Year's Eve, street parties are held, fireworks are set off and people go out in the masses to paint the town red and ring in the New Year with style. The following is a guide to some of the best and most unique events in town for expats and non-expats alike: The New Year's Eve Blowout party at Turuncu PanPan on Sıraselviler Avenue is perhaps the most expat-geared and bang for your buck event this Wednesday night. Expat resident DJ Ray Mac, who hails from Ireland, will perform and tickets are just TL 10 ($4.31) and include a prize drawing, making this the best deal in town and a great chance to mingle with fellow foreign Istanbulites.

Hard Rock Café, located in Beyoğlu, will also be hosting a special evening of food, drinks, live music and DJ's as well as a concert by the popular expat band Yabancı Değiliz – a multicultural group with members from the U.S., Britain and Denmark that perform rock, indie and alternative covers and originals in English and Turkish.

Mama Shelter, a popular Beyoğlu venue among expats, will be serving up a special dinner accompanied by signature drinks and a performance by soul and jazz duo Idil & Jesper followed by the DJ stylings of Madame Alpha, resident DJ from Berlin's favorite music club, Katerholzig. The entry price is TL 299, however, there is also a special menu for kids up to age 12 for TL 109.

To ring in the New Year with Istanbul's hipsters, head to Babylon, which will be hosting Radyo Eksen's New Year's Eve Party, with the station's top DJs playing dance, pop, R&B, soul and funk – all for an entry price of TL 50. To start off the year with the city's upscale scenesters, head to 360 Istanbul on İstiklal for a Roaring 20's party in the spirit of Chicago with performers including Mandengo and the Uninvited Jazz Band as well as a trapeze show. The price scheme starts at TL 400 and goes all the way up to a whopping TL 1,800 per person for a special booth, an exquisite dinner and unlimited Dom Perignon. 360Moda will be hosting a Meet the Legends party with live performances by look-alikes of Frank Sinatra, Tony Bennett, Charlie Chaplin, Marilyn Monroe, Amy Winehouse and Lady Gaga. This gig also has varying entry fees ranging from TL 75 for the show to TL 290, which features an exclusive dinner menu as well. A number of Turkey's great musical legends will also be gracing the stage to usher in the New Year, including Ajda Pekkan, who will be performing at the Wow Istanbul Hotel and Convention Center with tickets ranging from TL 500 to TL 1,000. Teoman will perform at Çubuklu Hayal Kahvesi in Beykoz, which has a stunning view of the Bosporus and is famed for its cuisine and bumping scene that continues into the wee hours. The concert begins at 10:00 p.m. and there will be a boat service offered, which will depart from Kabataş at 9:15 p.m., Beşiktaş at 9:25 p.m. and Üsküdar at 9:40 p.m. and return at 3:00 a.m. with tickets costing TL 137 per person. Turkey's legendary group MFO will be performing at Suada club on GS Island for an entrance fee of TL 105 per ticket. For a more low-key musical adventure, check out Turkish Anatolian rock pioneers Moğollar who will be performing at Kadıköy Sahne. Another option is heading to Le Meridien in Etiler where popular TV personality Ayhan Sicimoğlu will be joined by his band the Latin All Stars for a very special performance. Tickets for the event, which includes a special Latin American menu, range from TL 280 to TL 645. The Living Room Art Cafe and Social Club, an intimate jazz club in Kadıköy, will be hosting a special evening dinner accompanied by a reinvented repertoire of Turkish favorites by the Arda Gulyan Project for TL 190. Kiki Ortaköy has a line-up of DJ performances and will be dishing up a full-blown turkey dinner, while the Feriye Palace Festival Tent will also showcase a number of DJ's as well as Romanian vocalist Otilia with a stunning view of the Bosporus Bridge light show with tickets costing TL 139 at the door.

If you want to ring in the New Year in style in an authentic Ottoman Palace, the Çırağan Palace Kempinski will be offering a six-course gourmet menu with live music and DJ performances, or you can start the year right by enjoying a lavish brunch at its in-house restaurant, Laledan, on Jan. 1.

The Maslak Arena also has a long lineup of popular Turkish DJ's to set the beat for the ultimate dance party in the city. Tickets start at TL 150 for general entry but go up in price for private boxes soaring all the way up to TL 2,800 for a deluxe 8-person box. To dance the night away out of town, head to the Magic Factory Night at Beykoz Kundura Factory, a former show factory, that will have a series of DJ sets and dance performances and a boat setting out from Kadıköy, Üsküdar and Beşiktaş to get you there free of charge included in the ticket price, which costs TL 120. For a walk on the wild side, try out dance club XLarge's New Year Bollywood Eve Party, with go-go dancers, drag queens and an entrance fee of TL 88. Or you can celebrate at a private villa party for 400 hosted by Istanbul Student Life in Tarabya with its own fireworks show.

Fireworks will be set off throughout the city at midnight, with a number of neighborhoods hosting street parties and musical performances such as in Etiler, which will have a red carpet rolled out, a mapping show and performances by the popular Doğulu brothers, Kenan and Ozan, and there will also be street performances held throughout Kadıköy.

Outside of Istanbul, the Bodrum Municipality will be hosting their annual New Year's Eve celebration with music and dance performances and even a snow machine to bring snow to the south. In Izmir, one of Turkey's most-loved female rockers, Özlem Tekin, will perform in Alsancak's Cumhuriyet Square. Turks use the New Year as an opportunity to exchange gifts, and there are two excellent gift fairs selling handicrafts being held at the Military Museum in Harbiye in Istanbul and the ATO Congresiu in Ankara, with both running until Dec. 30.