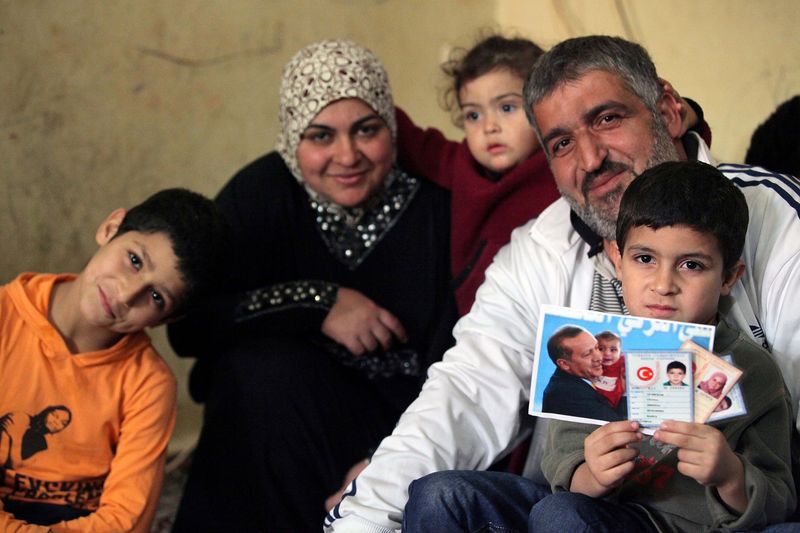 by Daily Sabah with AA Dec 29, 2014 12:00 am
Erdoğan Şenaa, a 5-year-old Palestinian boy residing in Lebanon, and his family, have recently acquired Turkish citizenship after President Recep Tayyip Erdoğan promised him he would work for them to get it during his visit to Sidon in south Lebanon in 2010.

His father, Muhammed Şenaa, said that he knew President Erdoğan would remember his promise and added that he gave the president's name to his child who was born in 2010 because of Erdoğan's support for the Palestinian issue. Şenaa expressed his happiness to receive Turkish citizenship from such a great leader who never forgets his promises.

"Although Erdoğan's work is very hard and intensive, he did not forget us, despite it being four years since he promised us. He is a great leader who deserves admiration. There is no leader like him today," he continued.

Highlighting the significance of acquiring Turkish citizenship, Şenaa said that although he was a refugee who could not move far away, now he is a citizen of a great country that pursues its demands and rights. "We heard that Erdoğan was going to attend the opening of a hospital in Sidon and I decided to go there. I like Erdoğan very much and only wanted to see him, even at a distance," Şenaa continued.

Behiyye al-Hariri, a deputy from Sidon, called Şenaa before the ceremony and said a car was going to take them to the venue. Hariri introduced him and his 2-month-old child to Erdoğan who held and kissed the child. "Erdoğan asked for the identity documents of my child and left with hopeful promises," Şenaa added. The Human Rights Institution in Lebanon began the necessary procedures and contacted the Turkish Embassy in Beirut.

"People said it was impossible for us to acquire Turkish citizenship and asked us to stop dreaming about it. However, I was not discouraged and they were shocked in the end. "Erdoğan kept his promise," he said, and added that keeping promises is a basic feature of being a Muslim.

Şenaa also asked all Palestinian families to give Erdoğan's name to one of their children. Erdoğan had previously granted Turkish citizenship to the 16-year-old Syrian pianist Tambi Asaad Cimuk, who is Syrian of Circassian origin, through a special decree at the beginning of this month. Cimuk then represented Turkey at an international music competition in St. Petersburg, Russia.