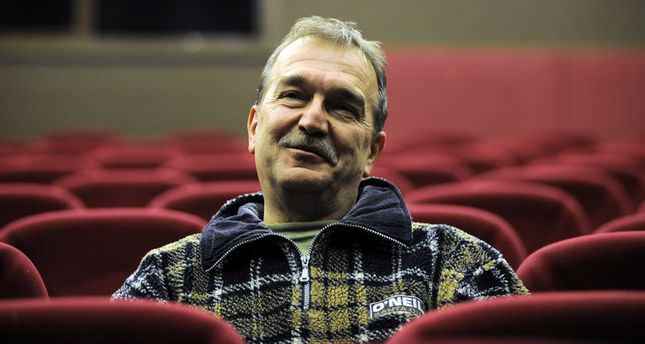 You may not recognize them but you have heard their voices dozens of times. Cem Kurtoğlu, a voice actor, has lended his voice to many famous actors, including Tom Hanks, Liam Neeson and Bruce Willis in Turkish-dubbed versions of Hollywood films

Dubbing refers to substituting the voices of actors who are shown on screen with different performers, especially used in movies adapted from languages other than English. Voice actors are responsible for maintaining a film's authenticity, and in Turkey, many famous Hollywood actors are often dubbed by the same person. For instance, theater, film and TV actor Cem Kurtoğlu is the voice of Tom Hanks, Liam Neeson, Bruce Wills, Nicholas Cage, Richard Gere, Antonio Banderas and Kevin Costner in dubbed Hollywood productions screened in Turkish movie theaters and on Turkish TV channels.

Kurtoğlu, who has also hosted TV programs during his career, dubbed Tom Hanks in "Captain Philips," "Cloud Atlas," "The Green Mile" and "Saving Private Ryan;" Liam Neeson in "Schindler's List," "The Grey" and "Les Miserables" (1998); and Bruce Willis in "Hostage," "Tears of the Sun" and "Red." He also voiced Nicholas Cage in "Trespass," "The Frozen Ground" and "World Trade Center;" Richard Gere in "The Flock," "The Double," "Chicago" and "First Knight;" Antonio Banderas in "The Legend of Zorro," "Femme Fatale" and "Assassins;" and Kevin Costner in "The Guardian," "Bodyguard," "The Postman" and Robin Hood."

In his statement to an Anadolu Agency (AA) correspondent, Kurtoğlu said that he has background in dubbing due to his degree in performance; yet, voice acting is very different to performing. Stressing that voice acting requires talent, he said, "You need to act, think and adapt quickly to the script. It is pure talent." He said that in the U.S., voice actors complete a film in 10 days after rehearsing many times. However, in Turkey actors do not have a chance to rehearse. "For example, the dubbing of "Cloud Atlas" was very difficult and I dubbed the film only in four hours without rehearsing," Kurtoğlu said.

Kurtoğlu has been dubbing movies for 32 years, and said that there are many successful voice actors in Turkey. For instance, Sungun Babacan is one of the top three names in the business. However, the actor underscored that voice actors in Turkey do not make a lot of money. "People tend to think that there is good money in dubbing, but there is no such thing. People only make good money in commercial dubbing, but companies only sign around five people. Since the sector does not offer enough money to qualified and talented individuals, people who are unqualified have begun dubbing," Kurtoğlu said, adding, "There are at least 15 people who voice Bruce Willis. The late Alev Sezer was the first voice actor who dubbed Willis in Turkish; in some major films, Babacan lends his voice to Willis as well." He also criticized inexperienced voice actors for talking as if they are news announcers.

Kurtoğlu noted that the Turkish film industry has fallen behind other countries, but he said that it is natural. "Our lifestyles have totally changed in the past 100 years. One hundred years ago, Turkey was a newborn republic without young people, as a huge part of the population died in wars and conflicts. Turkish society was recreated from scratch; of course, our culture was spoiled during the process. We did not have grandparents who could teach us our culture."

He highlighted that cinema is an extraordinary art form, however, everything depends on money in the industry. "You need money to shoot a good film," Kurtoğlu criticized, adding there are not many people who can spare the amount of money needed. "It is easy to shoot a TV series, but thanks to new electronic cameras, films are now shot with lower budgets," he said.

Kurtoğlu underscored that America uses its film industry to broadcast the message it wants. "As American cinema is being watched everywhere in the world, the U.S. delivers its political and cultural messages through the medium," he claimed. "When a mosque is shown in a Turkish movie, people criticize why the director placed an image of a mosque in that scene. I do not understand what is wrong with it. If we are to shoot a Turkish film, there should be both mosques and churches, as they both coexist in our country. If we want to produce good films, we need to get rid of this mentality," Kurtoğlu concluded.