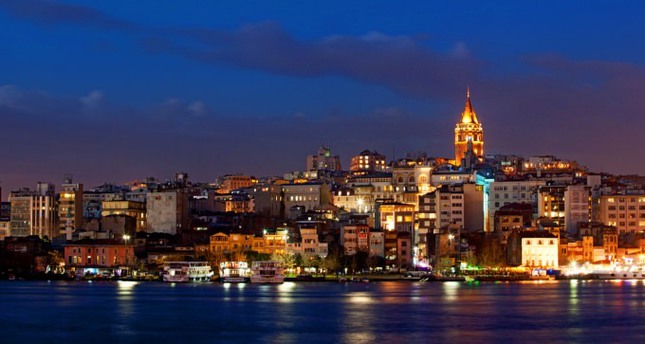 Istanbul, Turkey's cultural capital and largest city is also the country's haven for expats. After all, its history is marked by conquests; it was the capital of three empires and is the only major city in the world that straddles two continents.

The European side of the city is undoubtedly the highest in demand for expats and Turkish residents alike, as this part of the metropolis, which includes the old city, has historically been the center of commerce for Istanbul. Beyoğlu, and more specifically Taksim Square, is considered by most to be the center of Istanbul. With transportation options to nearly every point of the city, and the famed İstiklal Avenue, which offers great sights, shopping, dining and entertainment, living near this popular hub is a great jump-start for foreigners seeking the full-throttle exciting Istanbul experience.

Located just around the corner from Taksim Square, Cihangir, arguably the hippest neighborhood in town, has become an expat haven especially amongst newcomers to the city. This happening neighborhood is also popular amongst Turks and could be considered Istanbul's answer to Hollywood in L.A. or SoHo in N.Y., making it the ultimate spot to "see and be seen." One of the priciest neighborhoods in Istanbul, many flats have views of the Bosporus and the Sultanahmet skyline and the streets are lined with colorful cafes that cater to the foreign palate. This neighborhood is lively from morning to night and is a self-contained and safe oasis for expats and especially single women. Although there are no direct transportation options from Cihangir other than taxis, the transport hub of Taksim is just a few minutes' walk away. Situated on a plateau above the coastline of the Bosporus Strait, heading down any one of the lengthy stairway paths will take you to Kabataş, where the funicular heads to Taksim, the tramway heads to Sultanahmet and ferries set sail to the Asian side of the city. Although exercise options are limited to gyms, pilates and yoga studios, the Sanatkarlar Park above Tophane offers stunning views and plenty of grass and benches from which to enjoy them from.

The neighborhood of Çukurcuma, famed for housing a maze of galleries, antique and vintage shops on its colorful cobble-stone streets, falls west of Cihangir's cornerstone Firuzağa Mosque and tea garden and is a lower-rent option in a bohemian setting rivaling its neighbor as a new up-and-coming neighborhood, while Gümüşşuyu, which falls to the west, offers upscale and more reclusive housing options for the more settled expat resident.

Galata, situated near the northern shore of the Golden Horn and at the bottom of the popular pedestrian İstiklal Avenue, is crowned by the 14th century Galata Tower, which offers 360-degree views of the entire metropolis. A neighborhood growing in popularity amongst expats, its streets are lined with ateliers, cafes, vintage shops, boutiques and hostels. Rents are relatively reasonable and although it is situated on a notable slope, it's a short walk to the nostalgic tram on İstiklal, which heads to Taksim, while a stroll downhill will take you to Karaköy, the new art haven and cool café district that has surged in popularity in recent years and has transportation options including buses, the tram to Bağcılar and ferry boats to the Asian side and the "old city." You can also just walk across the Galata Bridge over the Golden Horn to Eminönü, which is lined with anglers, fish restaurants and nargile (sheesha) cafes.

Tophane, which falls east of Karaköy is just a stone's throw away from the Istanbul Modern Art Museum and Fındıklı Park, a grassy piece of heaven where you can enjoy a stunning view of the Bosporus amidst outdoor sculptures. Albeit less chic, yet centered between Karaköy and Kabataş, this traditional neighborhood offers easy transportation access and a sea breeze for the most reasonable bang for your buck.

Heading west is Beşiktaş, which with its central location as a ferry hub to the Asian side of the city as well as being just a short minibus or bus ride away from the metrobus, the Yenikapı-Hacıosman metro and the high-rise district of Levent and Maslak, is way and beyond one of the newest most popular destinations for expat arrivals. The area itself is like a mini cosmopolis with a stadium, numerous shopping arcades, parks and universities. Over the past five years and following the remodeling of the fish market, Beşiktaş has taken on an entirely new character with outdoor restaurants, coffee shops and cafes lining a maze of streets that remain lively into the wee hours of the morning. Popular with students and the English language-teaching crowd as well as musicians, Beşiktaş is an excellent low-cost option to be in the center of the city while at the same time in a self-contained and typical Turkish neighborhood that also boasts tea-gardens, practical shops, dime-store markets and food stalls.

Şişli harbors a number of neighborhoods that are popular with expats and Turks alike. Situated along the metro line, it is the beginning of the high-rise district and houses Europe's largest and the world's second-largest mall. Nişantaşı, an older elite Istanbul quarter has high-end shopping and restaurants and rents equaling its upscale standards, while Kurtuluş, which aptly means "independence and deliverance," and offers just that for more and more former Cihangir residents seeking reasonable accommodation that is still just an arm's length from the Beyoğlu vicinity. The Turkish inhabitants of this middle-class neighborhood, originally founded it in the 16th century as a residential area for Greeks, typically consists of the minority variety, while expats love the area being a typical Turkish neighborhood filled with small shops, charcuteries, green grocers and authentic "ocakbaşı" grill restaurants. It is also just a short stroll away from the city's oldest organic market held in Ferikoy on Saturdays with an antique bazaar in the same spot on Sundays.

Bebek flanked by Arnavutköy and Ortaköy to the west and Rumelihisarı and its stunning fortress to the right is one of Istanbul's most prestigious neighborhoods. The coastal road houses the city's most lavish hotels, restaurants and nightclubs and has an expansive bike and walking path along the Bosporus and between its two bridges. Public transportation is limited to buses and sparse ferries, however if you can afford to live in Bebek, chances are a car is your preferred mode of travel. Head north and you will find the fancy Akmerkez and İstinye malls and prestigious residential communities, which house the diplomat crowd. Bebek itself has adorable cafes and restaurants sprinkled along the coastline and is popular with a more pretentious league of Turks, especially for weekend brunches. For many expats, it offers a more comfortable and luxurious lifestyle and easy access to the academic strongholds Boğaziçi University and Robert College as well as the Istanbul International Community School and FARIT, the Friends of the American Research Institute in Turkey, which houses an extensive library and holds regular lectures and organized tours.

The Asian side of Istanbul is determinedly more residential, and as a result quieter, albeit it is still Istanbul, and also offers more outdoor opportunities to experience a health-oriented and more relaxed Istanbul experience. Kadıköy is the newest expat base, and its various quarters are gaining popularity for their true neighborhood feel yet plethora of transportation options ranging from ferry boats, sea buses, the metrobus, metro, minibuses and buses to all over town. The center itself is lined with streets full of restaurants, including the number one expat fave Çiya, as well as a colorful fish market, beautifully displayed green grocer stalls, charcuteries and coffee shops and also has its very own "bar street," aka Kadife Sokak, with numerous live music venues, making it one of the liveliest spots in town at any hour of the day. The seaside community of Moda is the priciest yet most popular spot in Kadıköy and is yet another self-contained haven of excellent food options, parks and tea-gardens with stunning views of the Marmara Sea. Other popular neighborhoods in Kadıköy include Yeldeğirmeni, whose streets are lined with exquisite street art and Bahariye, a popular pedestrian shopping street that has its own nostalgic tramway running through Moda into Kadıköy's Rıhtım. The seaside expanse from Kadıköy to Pendik is landscaped into an exquisite park with outdoor sports facilities, separate bike and running paths and endless green pastures to while away the day in the sun as well as a cleaned-up shore allowing for swimming in popular spots such as Caddebostan and draws in a young and active expat profile.

For those more interested in being reclusive and embedded in a true Turkish neighborhood, Üsküdar and its neighboring Kuzguncuk are also excellent options. Üsküdar is well-served by buses, minibuses, ferries and the Marmaray, whose undersea tunnel takes you to Sirkeci in just four minutes, making it a practical and affordable Asian-side location for expats employed on the European side. Kuzguncuk is famed for being a true Turkish neighborhood, but its proximity to the sea, pleasant streets and buildings as well as mellow cafes and restaurants are drawing more and more expat residents seeking a more relaxed way of life.

For true tranquility however, the Princes Islands, where Ottoman princes and other royalty once holidayed, hence their name, is the ultimate destination for expats who intend to be utterly introspective at home yet easily connected to the city by the multiple daily ferries and sea buses that stop in Bostancı, Kadıköy and Kabataş. Büyükada, is the largest and most populated island, however many favor Burgazada and Heybeliada for their characteristic coves. No cars are allowed on the islands, therefore it is a bike-lovers' paradise and walking amidst the greenery and the stunning coastline of the Sea of Marmara makes it a too-good-to-be-true spot for walking and nature-loving city dwellers.