Camel wrestling: Let’s hear it for the boys! 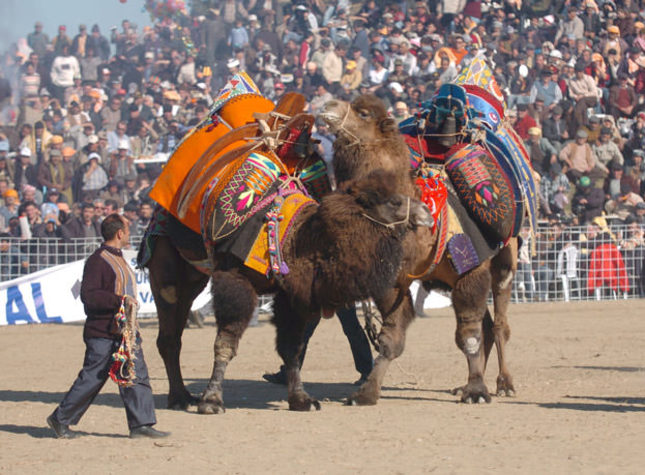 Once again it's camel wrestling season, an exciting time when this age-old tradition and one of the most anticipated events of the winter is celebrated as a series of regional festivals in Aegean and Mediterranean coastal villages from November to March

Deve güreşi (camel wrestling) is a sport in which two male hybrid Tülu camels wrestle in what is much more a comedic affair than a sport, as the focus is more on the animal's decorations and honoring their owners than any emphasis on actually winning. In this authentic and ancient tradition, most bouts end in a draw, which also emphasizes the idea of coming together to feast on a picnic in the sun, fun and inevitable spittle. The origins of the sport date back to over 2,000 years ago when ancient nomadic Turkic tribes would make their camels wrestle for the affection of a female, an act these normally-docile animals' engage in during mating season.

The camel wrestling tournaments that take place these days are all about prestige and not about cash or even necessarily winning, as owners are quick to pull their beloved camels away before they resort to any form of violence. These are precious beasts for camel owners and the glory comes more in the form of decorating them and showing them off rather than raking in the winnings. These animals are considered extremely valuable by their owners, most of which come from a long heritage of camel wrestlers; it is also a very expensive sport to keep alive. There is a passionate fan base among locals, and the camels, some of which have become household names, can sell for up to $200,000 based on prestige alone.

Today, camel wrestling is popular in provinces such as Çanakkale, İzmir, Muğla, Manisa, Denizli, Aydın, Burdur, Isparta and Antalya. Throughout the season, approximately 30 festivals are held, in which approximately 100 camels come out to duke it out in bouts that last for less than ten minutes each. The camels wrestle by using their necks as leverage to bring their opponent down, sit on them, make them yelp or inspire them to flee as a group of onlookers hold on to ropes, ready to pull the beasts apart if it gets anywhere near heated. The victor does not actually win a prize other than the rugs gifted to each camel that competes. However, they do gain prestige, which is the whole point of the competition to begin with, and lends added value to the prized camels to be sold, or when invited to compete in these annual festivals.

Each festival begins with a parade through the town and a galı gecesi (rug night), when the highly-decorated camels march through villages accompanied by the davul and zurna, a traditional bass drum and outdoor pipe. It creates quite a spectacle as these masculine camels are decked out in colorful pompoms, bells, beads, decorative rugs, carved saddles and the obligatory Maşallah sash, all painstakingly prepared and strung together by the owners themselves. Although camel wrestling is predominantly a male affair, much of the draw of the event involves the colorful and intricate decorations that adorn these camels, which are also judged at beauty contests held at many of the festivals throughout the season. These camels, which are bred especially for wrestling and can only compete after turning six, are the descendants of famous wrestling camels that came before them. They are given unique – and often comical – names that they are remembered by, including takes on politicians such as Barack Obama, Bill Clinton or Saddam Hussain, famous characters such as Rambo and Mad Max and creative spins on words such as Yarım Dünya (half world) and El Bombası (hand bomb).

Festivals are always held on Sundays and start early in the morning. Throngs of locals and camel-lovers alike converge upon the festival grounds laden with stalls selling camel sausages and souvenirs, as well as wandering musicians that play tunes for anyone willing to participate in the traditional Aegean zeybek dance. People also picnic on the grounds and will even set up a grill on makeshift tables as the lively "cazgir" (MC) builds up excitement with comic commentary while narrating the progress of each bout. A female camel may be situated nearby to get the males riled up, although, as a spectator, you might not notice a difference in the docile animals about to wrestle! Moreover, the whole event is kept pretty mellow with any inflicting of wounds such as biting strictly forbidden. The winner is determined by whoever is left standing, and the greatest excitement to be had from the fight is if a camel flees through the crowd, or if a bit of camel spittle is thrown into the audience.

"The camels, in the season of love, are dangerous," once said Luis del Marmol Carvajal, a 16th-century Spanish chronicler. In my opinion, this animal sport is not one that inflicts any sort of pain or suffering on this dignified breed. In fact, these festivals provide a more controlled and protected environment for camels to experience what is in their inherent nature. Speaking with Gizem Selçuk and Sibel Samlı, whose documentary "Yok Devenin Pabucu" (Holy Camel: A True Love Story), will be released this summer, they explain that for these camel wrestlers, their animals are their pride, joy and most valuable assets, from both an economic and emotional standpoint. "They believe the camel is a holy animal because it transported Prophet Mohammad, and they care for them as if they were one of their children. It is a beautiful and original animal-human relationship that is like no other," Samlı said, emphasizing that "They just care too much for their camels to let any harm come to them." On average, the time each camel spends wrestling each year would not surpass an hour, and they are otherwise spoiled and cared for throughout the year, explained Samlı, adding, "The behind-the-scenes lifestyle and rigorous care that goes into looking after these camels is a brilliant love story. It speaks for itself."

This weekend, Jan. 17-18, marks the grandest of festivals held throughout the season, as the country's most famous camel wrestling events take place in both Selçuk and Çanakkale, making it the perfect time for a weekend escape to one of these popular tourist destinations. So round up your friends and pack your picnic basket for a truly unique experience and perspective into a Turkish tradition that has survived from the distant past, to watch these magnificent beings in action, and the true testament of honoring their efforts in what is perhaps the most interesting animal sport in the world.