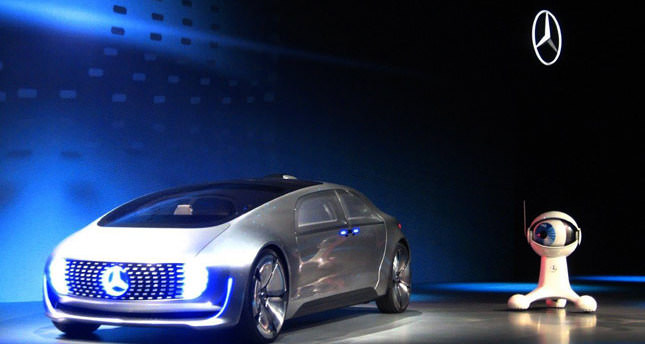 Over the past 17 years, we have had the chance to take a closer look at the annual plans of the International Consumer Electronics Show (CES) held in Las Vegas. We have also witnessed the rivalry between companies for many years. However, instead of solely competing with each other, now companies bring many new projects to the table from applications to wireless Internet service in order to reach as many people as possible. Everyone knows how women forget about time while shopping just as men lose themselves while watching a football match. Since women spend most of their time trying on clothes while shopping, technology intends to shorten this time for them.

Fitting in front of a "smartmirror"

Developed by Toshiba, the smartmirror enables customers to try on every dress in the store with a single hand movement. This talented mirror uses cameras and a computer screen, and is managed with hand movements. If the customer wants to change clothes, the only thing he or she has to do is to make a hand motion. The mirror also enables customers to change the color of the item. Moreover, the camera installed on the mirror determines the customer's size and helps him or her to see how the dress fits.

The Japanese love robots. I have never come across an android whose skin and looks are 100 percent human-like. Toshiba's Humanoid android stood out with its slant-eyes and skin color, however. I will not be surprised if we soon see these androids in every store and hotel in Japan. As a person who has watched Japanese individuals dancing salsa, I can say that their passion for androids is meaningful.

The automobile industry's biggest dream, autonomous driving, first came to life in Hollywood. The autonomous talking car called the Knight Industries 2000 (KITT), a heavily modified Pontiac Firebird Trans Am featured on the famous '80s TV series "Knight Rider," has remained in our memories for many years as a technological wonder. However, almost 30 years later, autonomous car technology goes beyond a TV fantasy. Bosch introduced their solutions for autonomous driving at CES. As Bosch board member Dirk Hoheisel said, science fiction is becoming reality with every passing day. Equipped with Bosch technology, the autonomous cars can drive and park in heavy traffic.

A photograph every 30 seconds

The cameras that we take everywhere with us sometimes become smartglasses or a heads-up action camera. Narrative Clip, previously known as "Memoto," captures every step of life with a process called "life-logging." This square shaped camera, which can be attached to shirts, coats or t-shirts, looks like a simple accessory but it records your day. Similar to Google Glass, the device syncs with your phone and stores your photos.

Data storage abilities of smartphones, tablets and cameras are improving by the day. The personnel at the Toshiba stand took a 30-second video of us. Then, he transferred it to a computer via the wireless system at the speed of 100 megabits per second. This is very important for people who are dedicated to photography and videos as well as sharing them on social media.

A camera designed for action

Many people want to capture every moment of their experiences and share it via their smartphones and cameras. A lens protector, which is an accessory for the Pentax WG-M1 camera, allows you to shoot a video for an hour underwater. The camera is also resistant to up to minus 10 degrees Celsius, dust and impacts. Without needing any additional accessories to protect it, the camera enables its user to take photos and shoot videos underwater as well as clearly record sound. The camera has a motion sensor that begins shooting as it detects motion, enabling it to shoot using loop recording, which is the process of recording videos continuously by creating a new file every five or 10 minutes. Also, it has a high-speed movie feature for those who want to shoot slow motion videos and time-lapse videos.