‘Setting foot’ into a new year: Birthdays in Turkey 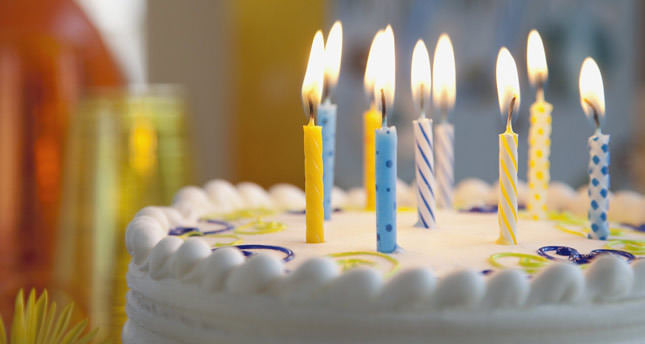 A surprise birthday party arranged by my friends for me was indeed a surprise, but not in the way you would think. Birthdays are low-key landmarks in Turkey and many never enjoy a special birthday celebration

I have just celebrated my 40th birthday; however it was much to my surprise as I had thought it was my 39th, and not yet the start of the fifth decade of my life. I was born in 1976, which according to my calculations in the U.S., makes me 39. That is because; I have officially completed 39 years on this earth. However, in Turkey, your age, year-wise, begins from the day you were born. So, since I was about to embark on new days leading up to my 40th year, in Turkey, that meant that I was in fact turning 40. In Turkish, they say you have "stepped on or set foot in" (ayak basmak) to the year that has yet to be completed. Needless to say, I somehow missed my 39th birthday and ended up celebrating my 40th in tragic-comic delight, making what might have been a dramatic event next year, a funny and fun way to usher in the year.

To celebrate this momentous year, very unbeknownst to me, my friends had arranged a "surprise party," which indeed was a surprise, but not in the way you would think. Although birthdays are a much more low-key landmark in Turkey with many who never celebrate in any special way, in cities it is now a different case and birthday parties, some even extravagant, are becoming more and more the norm. Among my Turkish friends, it is rare to know each other's birthday however and so I was surprised when suddenly my friends appeared from the mist one by one as if it were a complete coincidence they were coming to sit at the very tea garden I was frequenting my birthday afternoon. I literally thought I was having a contemplative cup of tea along the sea and by complete coincidence was running into friends who chose to join me unawares that they even knew it was my birthday. It was actually maybe an hour into what was my "surprise 40th" until I realized that in fact everyone was in cahoots to celebrate this special day with me. It was low-key and lovely and relieved all of the pressure and adrenaline that comes with an American-style "surprise party."

In the U.S., a surprise party is held by prearranging a meeting of guests up to an hour before the birthday girl or boy arrives. The person whose birthday it is will usually be swayed to think everyone forgot it was their birthday and may even be sent on a goose chase with a reliable close friend who has to play the part of pretending there is nothing special going on. Meanwhile, the guests have gathered in the venue hosting the party and are all ready to switch off the lights and kneel down in order to shout out "surprise" and turn the lights back on once the person whose birthday it is has arrived. What ends up happening many-a-time is the guest of honor gets a pretty big shock and spends the rest of the evening recovering while commending everyone on how they kept their lips-sealed.

For my surprise birthday in Turkey, it took the better half of the evening for me to figure out it was even a party for me, something of a surprise, second to the fact that I had somehow also lost a year in terms of celebrating and was somehow now into the over-40 category, much to my dismay and demise.

Turks don't celebrate birthdays with the same fervor we do in the U.S. and in many villages and rural areas, birthdays may not even be celebrated at all. This is because many a rural Turk does not even know when their birthdays are. It used to be that parents would obtain their newborn's birth certificate at a later time, perhaps even months later, and when they did the date entered for their date of birth would be recorded as the day they applied. Hence as time passed, the actual date a child was born on would easily be forgotten with the registered date being the only one on record, but not necessarily accurate. There was also the factor that the new Turkish calendar, which was adopted in 1928, posed yet another hurdle in trying to keep track of when someone's birthday actually was.

Turks pay much more importance to giving names and you may very well notice that every single name given to a Turk has some sort of meaning and is never just a collection of befitting sounds. The Republic of Turkey Surname Law, which was adopted on June 21, 1934, allowed people to choose their own surname, which many times they did based on their line of profession, or a particular characteristic, for example in 2013, the most popular surname in Turkey was Yılmaz, which means dauntless. Mehmet, in reference to Sultan Mehmed the Conqueror, was the most popular male first name, while Fatma, a take on Fatima, which means, "the shining one" and was the name of the Prophet Muhammad's daughter, was the most popular female name in 2013.

My parents chose to name me Leyla, which means the darkest part of the night, in other words dusk. For me it has been a perfect fit and blend of Turkish and American, as after Eric Clapton released the hit Layla, this ancient Arabic name soon became a new favorite in the U.S. My mother thought she was being original and very Turkish in giving me my name, but by the time I went to preschool in Los Angeles, "Layla," due to the popular Clapton song, had become one of the newest "in" names and there were four others of my namesake in my class alone!