Love of times past in old Anatolia 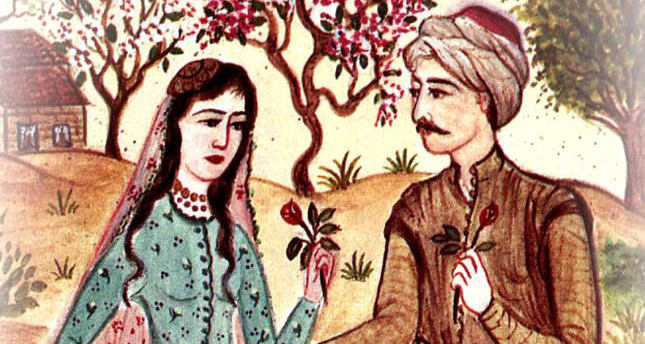 A number of epic love stories have permeated Turkish culture and beyond, and believe me none are of the feel-good variety. However, these folkloric tales are steeped in history and predate other tragic love stories such as that of Romeo and Juliet by a thousand years. These tales are dramatic and romantic unrequited love stories with tragic endings, so no need to wallow if you are "sans love" this Valentine's Day, as many of these tales show – sometimes, love hurts.

To know more about this culture we have adopted as our own, this is an opportune time to dust off our knowledge of Turkey's great love tales. All of these heroes have become household names, and many, even me, have been given their names.

My own name, Leyla, is the name of the protagonist of an immortal love story called "Leyla and Mecnun." This story was also the inspiration behind Eric Clapton's popular song "Layla," which he recorded with Cream. Lord Byron has referred to this story as the "Romeo and Juliet of the East," although the oral tradition of this tale predates Shakespeare by a 1,000 years, and its roots trace back to seventh century Arabia.

As the story goes, Qays and Layla fall in love, and he begins composing poems for her. When Leyla's father does not grant her hand in marriage to Qays, he withdraws into the wilderness, reciting poems and conversing with wild beasts of his love for her. He is given the name "Mecnun," which means being possessed by madness for love. Resigned to their son's decision to retreat into nature, his family leaves Mecnun food, and he can occasionally be seen reciting poetry or writing in the sand with a stick. His whole existence becomes loving Leyla and composing prose for her. Legend has it, Leyla would seek out her unrequited love, and they would meet and recite poetry together. Eventually, she is betrothed to another and dies of a broken heart. Mecnun's dead body is found soon after at the same site, having carved three verses into a rock nearby that read: "I pass by these walls, the walls of Layla. And I kiss this wall and that wall. It's not Love of the walls that has enraptured my hear, but of the One who dwells within them."

The name Mecnun has since become somewhat taboo and is only used to infer that someone is going a bit mad; however, Leyla is prevalent as both a name or to mean to be intoxicated by love. This most famous love story in Turkey and the greater region was popularized in a literary adaption by 12th century Persian poet Nizami Ganjavi.

Farhad and Shirin is another love story that was penned by 12th century poet Nizami in his "Quinary." In the Turkish version of the tale, which takes place in Amasya, Ferhat falls in love with Shirin, who is a princess. To gain the Queen's favor and permission to wed Shirin, Ferhat is tasked with carving a tunnel through a mountain to bring spring water to the palace. He receives false information that Shirin has died, and so he throws himself onto the rocks in his grief, and his beloved princess does the same soon after, with legend having it that they are buried somewhere together. In Amasya, you can visit Ferhat's Water Canal, which dates back to Hellenistic times and plays a major role in this epic tale.

Kerem and Aslı is another epic anonymous love story in line with Romeo & Juliet that dates back nearly a 1,000 years. In this case, Kerem is a Muslim Turk in love with Aslı, an Armenian Christian whose father is an Orthodox priest. Their differing religious views pose an obstacle for these two lovers, as Aslı's priest father takes her far away to separate her in distance from her love. Kerem in turn, abandons his riches and becomes a poor poet devoting his life to seeking out Aslı and singing love songs on his saz. Kerem eventually finds Aslı in Halep where he has gained the favor of the Halep Pasha, and the Pasha convinces Aslı's father to let her marry Kerem. However, Aslı's father conducts a spell to ensure Aslı's nightgown never opens, and Kerem bursts into flames from the fire in his heart. Aslı is also set on fire when she tries to pat down Kerem's ashes and joins her love in the afterlife.

As a result of this story the term "Kerem gibi," which means "like Kerem" is used on occasion to refer to a burning love. A poem entitled "Like Kerem" by famous poet Nazim Hikmet (Kerem gibi) reads, "If I do not burn, if you do not burn, if we do not burn, how will darkness come to light?"

The tale of Tahir and Zühre takes place in Konya and begins when a sultan and a vizier make a wish to have children and are given a magic apple that they share, and both end up having children born on the same day nine months later. They are given just one instruction in having their wish granted and that is they will never separate the two children who are born. Zühre is the sultan's daughter, while Tahir is the son of the vizier, and they grow up together and do indeed fall madly in love. The vizier's son is not considered to be a suitable match for the sultan's daughter, however, and so they are torn apart with Tahir sent to a dungeon in Mardin and Zühre locked up in a room in the palace. Tahir eventually breaks free of the dungeon and heads to Konya to find Zühre; however, he is tied to a boat and pushed out to sea. He is saved only to hear news of Zühre's wedding to another, and so he disguises himself and heads to the palace where he is recognized and killed. Zühre, in her wedding gown, places her veil over her deceased loved one and then passes away right there. They are buried next to each other, and their gravesite in Konya has since been made into the Tahir and Zohre Mausoleum.