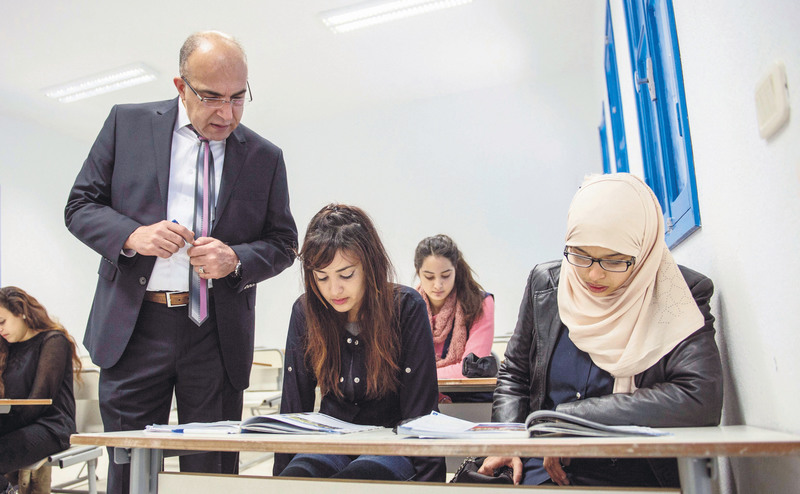 by Daily Sabah Mar 02, 2015 12:00 am
Within the framework of initiatives between the Turkish and Tunisian Ministries of National Education and the agreements that were signed between the two countries in 2012, the Turkish language has become an elective language course in the Tunisian curriculum along with German, Spanish, Italian, Chinese and Russian. It was announced by officials that Tunisian students have shown a significant interest in the elective Turkish language courses at school. The officials claim that Turkish is the most in-demand elective language course in the country.

Ömer Gücük, Turkey's ambassador to Tunisia, said that Turkish courses are provided by 16 Turkish teachers in the capital of Tunisia and in 10 other districts. "We have increased the number of Turkish teachers due to the demand. Nearly 700 Tunisian students have chosen Turkish as an elective language course. Tunisia's Ministry of National Education and Turkish officials are very happy about the interest in the Turkish language," he went on.

Mehmet Ali Aydın, who has been teaching Turkish in Tunisia since 2010, said that Turkish is a highly popular elective course, among other languages that are taught in the country. "We are conducting our work in collaboration with Turkey's embassy in Tunisia," he said. "This is something that you can do only with your heart. When we first came here, there were only three Turkish teachers here," he added. Aydın, who claimed that Tunisian students love the Turkish language, said, "This country is beautiful. Our students are dedicating themselves to learning Turkish. The interest in the elective course is a sign of this." Thanks to the hard work of Turkish students, the Tunisian university entrance exam has featured questions evaluating the students' ability to master the Turkish language. "This is flattering," Aydın noted. "We will continue to work hard to teach Turkish to more students," he concluded.

Manel Turki, who is a senior year student at the Hammamet Muhammed Buzina High School, said that he loves the Turkish language and Turkey. "I think Turkish is a very entertaining and easy language. I am proud of myself for learning it. My only dream is to continue my university education in Turkey and become an engineer," he stated.
Last Update: Mar 03, 2015 9:50 am
RELATED TOPICS