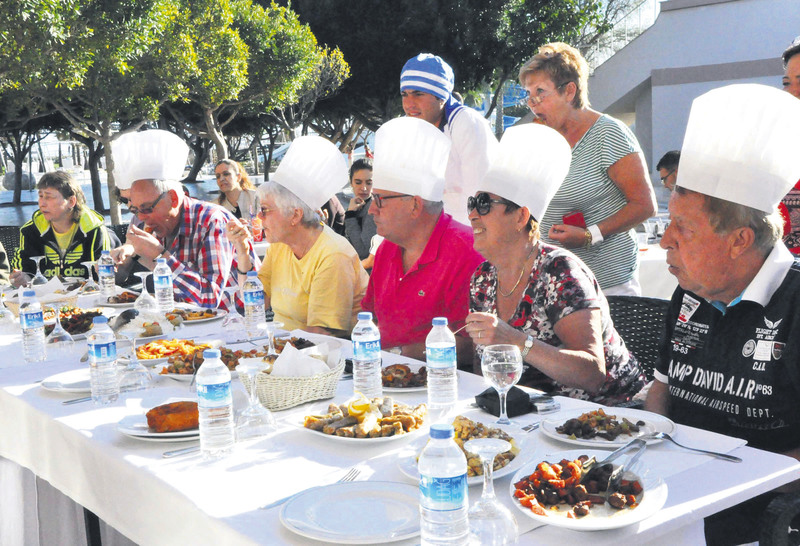 by Daily Sabah with AA Mar 02, 2015 12:00 am
The Gastronomy Tourism Report released by the Association of Turkish Travel Agencies (TÜRSAB) stated that the number of tourists surpassed 1 billion around the world and 88.2 percent of this number puts a "good meal" as priority in their destination preferences. There are now more people who want to travel countries with the best food. Tourists spend 6.523 billion dollars of the total expenditure amount for food, which means meals composes 19 percent of general expenses. In other words, tourists pay one fifth of their money for food. The per capita amount paid for restaurants is 157.7 dollars.

According to the report, 41.415 million tourists visited Turkey last year and they spent 34.3 billion dollars in total. The per capita expenditure rate was around 828 dollars.

Turkish citizens who travel abroad spend 36.5 dollars more than the amount paid by tourists in Turkey for food, according to the report. In 2014, 7.982 Turkish tourists went abroad. Their total expenditure reached 5.470 billion dollars. Turkish tourists' per capita total expenses (685 dollars) is less than that of foreign tourists in Turkey. However, the money paid for food does not show such similarity. Turkish people visiting foreign countries spent 1.549 billion for food last year. The per capita food expense was 194 dollars, comprising between 28 and 30 percent of the total expenditure.

The report said the main reason behind this scene is that all-inclusive holiday opportunities are less frequent in Turkey, compared to many countries, especially Europe. However, gastronomy tourism, which has recently gained popularity in Europe, increases the per capita food expenses. According to the report, cuisine-related events are the main component of gastronomy tourism. Almost 80 percent of organizations in this field stated that they produce custom-made products for their gastronomy activities. There are currently 17,879 organizations active in gastronomy tourism in the U.S, making the country a leader in the field. Turkey ranks 23th with 94 organizations according to a global list including all stakeholders such as restaurants, tourism agencies, hotels and culinary schools.

Last year, food composed between 19 and 20 percent of the total expenses of foreign tourists in Turkey. This means that 828 dollars were spent per person, among which 157 dollars went for food. Turkey wants to increase the share of food expenditure in total expenses of foreign tourists, though. TÜRSAB President Başaran Ulusoy said that gastronomy takes an important place in value-added alternative tourism. He stated that Turkey should have realized its great potential in gastronomy tourism earlier, but the country has made significant progress with provincial chambers of commerce. Ulusoy said every city in Turkey is in competition to promote its unique tastes. "Following our comprehensive studies, we have put Far Eastern countries as our main target because they spend large amount of money in food during their Turkey visit," he said. The TÜRSAB will prepare exclusive promotional activities for the cities like Adana, Gaziantep, Şanlıurfa, Hatay and Mardin, where Japanese tourists flock into. "We will introduce the traditional cuisine of eastern Turkey cities in abroad," Ulusoy continued. Promotion activities will also cover the traditional dishes of Turkey's other regions.

Ulusoy underscored the importance of registered local products approved by the public institutions. "There are very few registered local food products, although Turkey is rich in traditional cuisine. The Turkish Patent Institute has approved 124 food products with a geographical indication," he told. The eastern Erzurum city has the highest number food products with geographical indication including "civil peyniri," "kadayıf dolması," "karnavras dut pekmezi," (a kind of molasses) "Oltu cağ kebab" and "İspir kuru fasulyesi." Erzurum is respectively followed by Kayseri, Manisa, Mersin, Mardin, Afyon, Bursa and İzmir in the list.

Gastronomy also takes an important role in terms of cultural heritage. Traditional cuisines are added to UNESCO's Intangible Cultural Heritage List. The ceremonial "keşkek" (a traditional Turkish ceremonial dish prepared for wedding ceremonies, circumcisions and religious holidays) tradition was added in UNESCO's Intangible Cultural Heritage List in 2011 while the Mesir Macunu festival of Manisa was included in the list in 2012 followed by Turkish coffee and tradition in 2013. "Mesir macunu" is a traditional paste made from fresh herbs and spices. With its rich history and cultural heritage, the southeastern city of Gaziantep submitted its application to UNESCO for the inclusion of the city's traditional cuisine onto the intangible cultural heritage list last year. The metropolitan municipality has also submitted its candidacy for the "World Food and Beverage Tourism 2019."
Last Update: Mar 03, 2015 9:48 am
RELATED TOPICS