Madonna wants 'a drink' with Le Pen, who she once demonised on stage 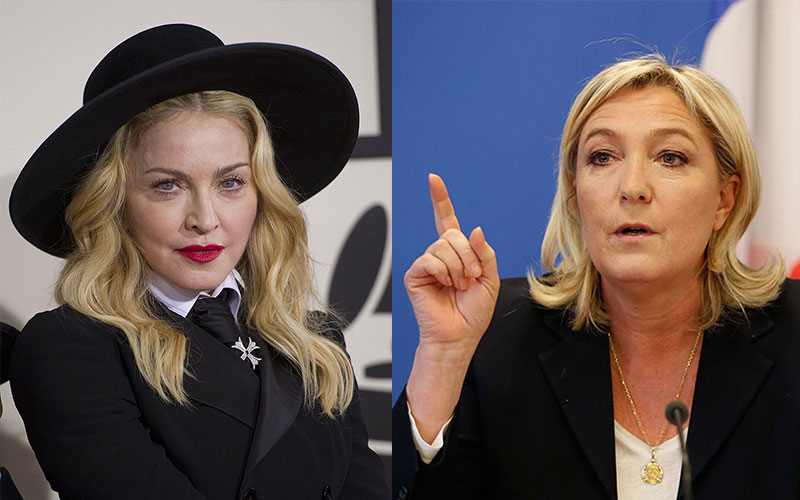 by Mar 03, 2015 12:00 am
Madonna wants to "sit down and have a drink" with France's far-right leader Marine Le Pen to hear out the woman she once demonised on stage by showing a picture of her with a swastika on her forehead.

"I would like to sit down and have a drink with her. I want to understand where she's coming from," Madonna said.

The US diva's tone towards Le Pen was markedly different than in the past. In 2012, Madonna superimposed a swastika on a picture of Le Pen during a Paris concert, provoking a threat of a lawsuit from the French politician.

Last week, on French radio station Europe 1, Madonna claimed "it feels like Nazi Germany" in Europe because "anti-Semitism is at an all-time high" in France and elsewhere on the continent.

The diva also told the radio that she had received "a lot of criticism and threats from Marie (sic) Le Pen" and the National Front.

But in the Canal+ interview, Madonna conceded: "Maybe I misunderstood Marine Le Pen. I'm not sure. I don't want to start a war. I want peace in the world."

During the TV show, Madonna met and hugged one of the cartoonists who survived the January 7 massacre at the offices of Charlie Hebo, the French satirical newspaper.

The 56-year-old also sang a couple of songs from her new album, "Rebel Heart", that she is promoting ahead of a global tour.

Madonna's on-stage tumble at the Brit Awards, when a cape she was wearing failed to detach on cue and brought her crashing down steps, was raised early in the interview.

The interviewer quoted a Chinese proverb that says "the biggest difficulty is not how you fall, but to get up each time that you fall".

That earned a surly response from Madonna. "Is it going to be a whole night of these jokes?" she asked.