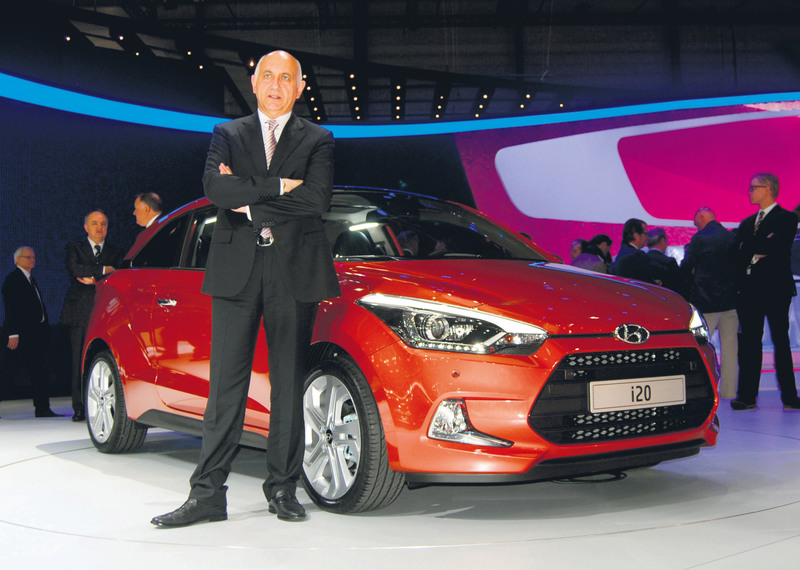 First held in 1905, the premier auto show exhibits not only cutting-edge concept cars, but also accessories. A total of 58 Swedish automotive companies exhibit auto components with custom-made accessories. Visitors have a chance to see environmentally friendly cars as well. The auto show will run through March 15.

Doblo Trekking, a new model from Fiat, made its debut at the fair. For those looking for a rugged van, Trekking is ideal with its roof racks and 16-inch alloy rims. Equipped with eco-leather seats, the car's new electronic traction system promises to grip in difficult terrains.

Renault's new and the first ever C-segment crossover Kadjar has also been officially unveiled at the Geneva show. Kadjar will be available in Turkey in the upcoming summer months. In partnership with Chinese firm Dongfeng, Renault's new model has been produced in a brand-new factory in Wuhan along with Renault's site in Palencia, Spain. The Kadjar will compete with Nissan's Qashqai, as both have similar components, thanks to the Renault-Nissan Alliance. Available with a diesel motor and 4X4 transmission, the Kadjar will undoubtedly increase Renault sales in Turkey.

Another new model launched at the event is the sporty three-door i20 produced at Hyundai's İzmir factory. The i20 can be purchased in two gasoline variants (1.25 liter 84hp or 1.4 liter 100hp) and two diesel variants (1.1 liter 75hp or 1.4 liter 90hp). Automatic transmission will be available for the 1.4 liter diesel variant. In upcoming periods, there will be i20 models with a one-liter, three-cylinder turbocharged engine and a model with a fuel motor generating 100 and 120hp.

German carmakers are shifting their focus towards high-end electric vehicles, such as the Audi R8 e-tron, and away from cheap city cars, in the latest effort to revive environmentally friendly, but unpopular zero-emission vehicles. At the Geneva Motor Show, Audi unveiled an emission-free version of its $184,619 R8 that can drive 450 kilometers before needing to recharge, which takes less than two hours. It marks a new departure for Audi, which has agonized over whether to launch a range of electric vehicles.

Battery-powered cars have failed to live up to their initial hype, with drivers put off by the slow roll-out of recharging stations, and limited range – despite generous sales incentives in some markets. Because the batteries, cabling and cooling systems for electric cars cost more than a conventional combustion engine, electric vehicles have struggled to gain widespread acceptance among price-sensitive customers, particularly if the same model is available at a cheaper price with a more conventional power train. However, U.S. automotive company Tesla, which produces cars with a starting price of $77,000, has had notable success with electric cars.

A premium price tag enables the carmaker to install a larger battery that would be uneconomical in a cheap car, giving the vehicle a range of more than 400 kilometers on a single charge. In smaller electric cars, the operating range is limited to around 100 kilometers until costs come down.

There is also plenty to tempt the senses at this year's Geneva Motor Show. And now carmakers are eager to please the noses of buyers as well, throwing a range of scents, including refined and distinctive "new car smells" into the mix. "When you walk to a car, the design is very important; but if you enter the car, one of the first things you recognize is the smell or the odor inside the car," Hartmut Kovacs, head of interior emissions at Mercedes-Benz, told AFP.

Our sense of smell is particularly powerful, explained Annick Le Guerer, an anthropologist and philosopher who has written a book on the subject. "The sense of smell is linked to the parts of the brain that are used for memory, affectivity and emotions," she told AFP. "If you put fragrances in your car that remind you of happy times in your life, there is an unconscious impact on your desire to stay in your car longer," she said.

But Emmanuel Boudard, head of interior air quality innovation at PSA Peugeot Citroen, acknowledged, "We have not yet identified a fragrance that makes people buy cars." In fact, the opposite is true. Studies have shown that "when the odor is too strong, comfort levels drop," Juliette Quatararo, in charge of odor issues at PSA, highlighted. In fact, a lot of the work is going into fragrance to ensure scents are not overpowering, and that only the good ones are allowed inside.

"The nature of the smell is vital," Quarataro said, adding that PSA attempts to ensure its cars do not smell too strongly of plastic or imitation leather. "There are substances that smell bad that are banned," she said.

Renault meanwhile takes a hard line when it comes to odors. "Our odor policy is to have as little as possible in the car," the French carmaker said. Other carmakers are also wary of strong smells. Kovacs said Mercedes-Benz refuses to use any components that do not meet its odor neutrality standards. But once manufacturers ensure that the smell of their cars will not drive customers away, some throw in a dash of perfume to entice them to stay. "The olfactory aspect is as important if not more important than the visual aspect," said Cyrille Gerhardt, who runs "Smell Marketing," a company that specializes in the technique already widely used in hotels and luxury stores, which is catching on among some carmakers. "Smells that brings back good memories will motivate people to come back," he said. However, he also warned: "You can have the best smell in the world, but if the visual aspects don't work, … if the sound aspects don't work, it will not provide an acceptable level of comfort to the client," Gerhardt said. "It is the subtlety of the combination that is important," he concluded.
Last Update: Mar 05, 2015 1:07 am
RELATED TOPICS