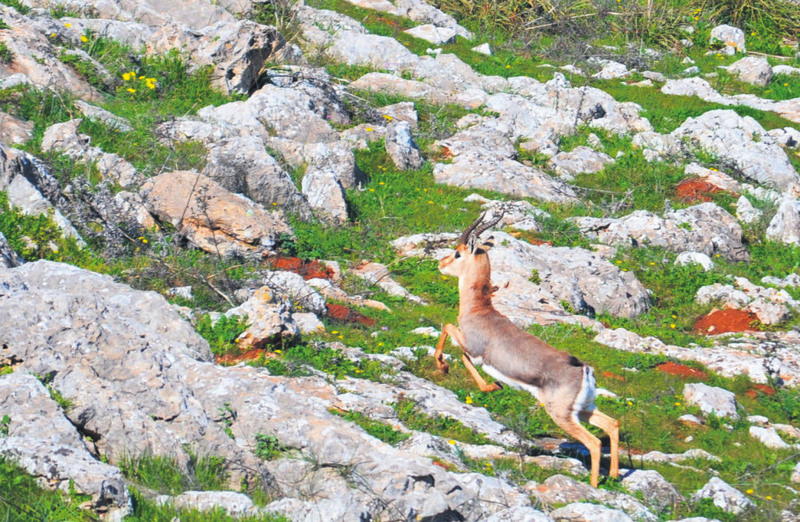 by Daily Sabah Mar 09, 2015 12:00 am
Following comprehensive precautions, the number of mountain gazelles (gazella gazella) living in the southern Hatay city has increased from 150 to 345 in the last five years. The almost-extinct species has settled in a nearly 7,000-hectare mountainous terrain between the neighborhoods of İncirli and Sucu, which is 20 kilometers away from the district of Kırıkhan, near the Syrian border.

Mountain gazelles had been thought to be extinct in Turkey, but a limited number was detected seven years ago. The Forestry and Water Affairs Ministry, the General Directorate of Nature Protection and National Parks, the Association for Conserving Turkey's Nature (TTKD) Hatay Branch and the World Wide Fund for Nature (WWF) Turkey's Representative Office, have conducted projects to increase their number. In 2009, the number of mountain gazelles was around 150. Part of their habitat is located in a forbidden military zone, creating a safe haven for the animals. The local residents also make efforts to protect them. They treat mountain gazelles as sacred animals, and believe that something bad will happen if any of them are killed. Abdullah Öğünç, the president of TTKD's Hatay Branch, said the association is happy to see the increasing number of gazelles around the region. Conservation activities have been taking place since 2010, Öğünç continued. He said the biggest reason for their survival is that they are living in the forbidden zone, preventing them being hunted. Bülent Gerici, one of the local residents in the Perişan neighborhood, said mountain gazelles sometimes appear in their farms and the locals think these animals are beneficial for the village.

The almost-extinct species have been under intensive protection, said Ethem Boz, the regional head of the General Directorate of the Forestry and Water Affairs. Officials of the Nature Conservation and National Parks maintain effective control and carry out awareness-raising activities around the area. Besides Turkey, mountain gazelles can be found in Israel.
Last Update: Mar 09, 2015 10:09 pm
RELATED TOPICS