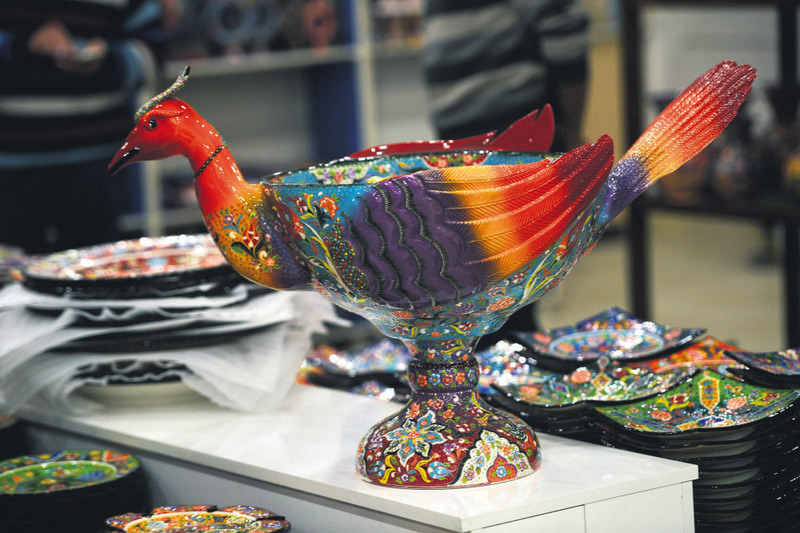 The application process has been initiated in the central province of Kütahya, which was a vital center for tile art that peaked in the 16th century, to place the traditional profession onto UNESCO's Intangible Cultural Heritage List

Embellishing palaces, mosques and caravanserais for 600 years, the traditional tiles of Kütahya seek a place on UNESCO's Intangible Cultural Heritage List. The Ministry of Culture and Tourism and the Chamber of Kütahya Tile Makers have been conducting a joint study for the last two years to include the traditional Turkish art on the UNESCO list. Sadık Erilbaylı, president of the Chamber of Kütahya Tile Makers, told that they have achieved significant progress so far. He said the Kütahya tiles will be included on the UNESCO list next year. "We are proud to keep a 600-year-old traditional handcraft alive," Erilbaylı stressed.There are currently 417 registered tile-making workshops with 826 craftsmen and 53 tile artists in Kütahya. Apart from professionals, there are those who make tiles at home. Erilbaylı said the total number of people engaging in the tile-making sector is 6,000. "Kütahya tiles continue to adorn mosques, palaces and other religious places all around the world," he said. However, the sector suffers from certain problems. Erilbaylı said the traditional tiles are sold below their real value. "We still lack a properly-organized tile-making sector, but continue our studies nonetheless. We also expect and hope for employment support," he said. The value-added tax on traditional arts in the EU is about 1 percent; however, it is 18 percent in Turkey. The chamber has submitted its request to the Finance Ministry that seeks the reduction of the rate to 5 percent. "We have completed all the necessary procedures. I hope we will receive good news soon," Erilbaylı continued. He added that Chinese tiles are commonly seen in the market, and customers should be careful while purchasing Kütahya tiles to avoid inauthentic ones.

Mehmet Gürsoy, included on UNESCO's Living Human Treasures List in 2009, said that he has engaged in this profession for 40 years. Traditional Turkish tiles experienced a golden age in the 16th century, but lost its fame a century later due to the lack of demand. "This is why I want to keep this art alive," he said. "The masterpieces of senior craftsmen decorate museums, mosques and palaces. However, tiles are not produced now as much as they were in the old times. UNESCO evaluated my work and added my name to the list six years ago."

Turkey has increased its efforts in recent years to place their cultural specialties onto UNESCO's lists in order to achieve greater worldwide recognition.

Already having submitted its application last year, state officials expect the ancient city of Ephesus to be included on UNESCO's World Heritage List in 2015 after of waiting for 22 years.

Last year, the art of "Ebru" (paper marbling) became the 12th cultural specialty from Turkey to be listed by UNESCO and was added to the U.N.'s list of world cultural heritage. Culture and Tourism Minister Ömer Çelik said that Turkey applied for this art to be included in UNESCO's cultural heritage list in March last year. "With the art of Ebru, the number of elements that represent Turkey on the list has reached 12," Çelik told AA, highlighting that Turkey's application was among the first five out of 46 others.

Turkish officials also seek better recognition in traditional cuisines. The Gaziantep Metropolitan Municipality recently submitted its application last December to UNESCO for the inclusion of the city's traditional cuisine on the intangible cultural heritage list. The municipality is currently waiting for UNESCO's response, and encourages restaurant owners who have the capacity to compete with other famous brands should promote their dishes to increase the city's appeal at international platforms. Gaziantep cuisine occupies a special place among world cuisines as well as in Turkey due to its regional traditions and abundance of flavors. The local dishes of Gaziantep are many and varied – the result of its historical and geographical position. The city's cuisine includes a variety of meats, vegetables and baked goods from other regions of Turkey, which were brought to the region by migrants, as well as many foods that have come from Syria.
Last Update: Mar 16, 2015 9:36 pm
RELATED TOPICS