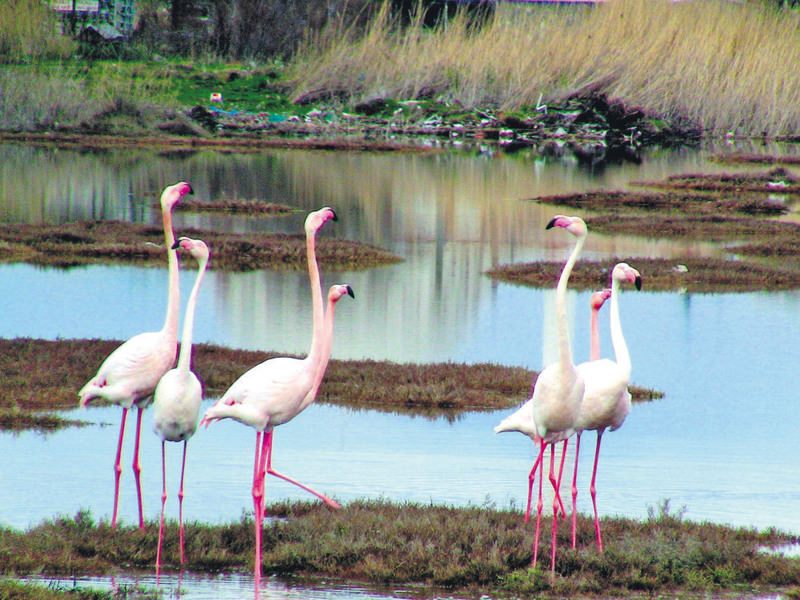 by Daily Sabah Mar 24, 2015 12:00 am
Known as "red-colored cranes" in Anatolia, flamingos flocked to Ayvalık, a popular tourism spot in northwestern Balıkesir province, and settled in the region. Feeding and matying mostly around Tuz Gölü (Salt Lake) and İzmir province in Turkey prior, they started to appear around Ayvalık thanks to the district's convenient catchment area for flamingos. The director of the Directorate of Food, Agriculture and Livestock of Ayvalık, Yusuf Aygün, said that alkaline and salty lakes are generally preferred by flamingos as a living space.

Explaining that the district has a little salty lake that is used for harvesting salt, Aygün said: "The reason behind their settling in the region in the last years is the convenient feeding environment of region for the flamingos." Underscoring that flamingos eat crabs, shrimps and mosses, Aygün said that Ayvalık is a fertile district in terms of those kinds of creatures. "It is possible that we'll witness more flamingo migration through our region hereafter. Our district having a mild climate it is a very adventageous for their breeding. In general, they are known as an immigrant species, however, because of the convenient environment, they might stay in Ayvalık permanently and make it their home. Their existence in our province is an advantage for tourism and they also are attracting bird watchers, too," he concluded.
Last Update: Mar 24, 2015 1:51 am
RELATED TOPICS