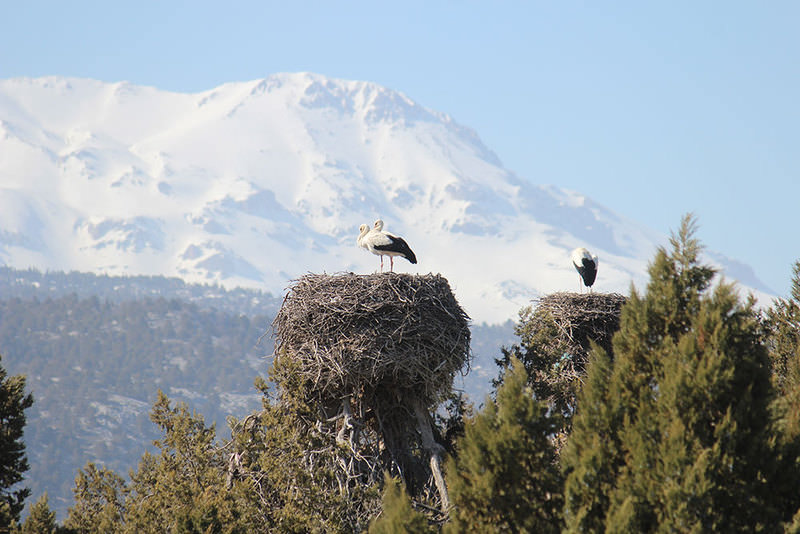 After their nests were destroyed in a tree 23 years ago, a group of storks have remained living on an iron pole in the Elbistan district of Kahramanmaraş, a southern city in Turkey

To avoid a long sea crossing over the Mediterranean, storks from central Europe have two options - they can either follow an eastern migration route by crossing the Bosphorus to Turkey, traversing the Levant, then bypassing the Sahara Desert by following the Nile valley southwards, or they can follow a western route over the Strait of Gibraltar.

As Doğal Hayatı Koruma Derneği (Wildlife Conservation Society), DHKD, states that the population of storks in the whole of Europe can be divided into two groups - west and east. The Western population breeds in Western and Northern Europe and spend the winter in regions between Chad and Senegal. The birds in Eastern Europe, including Turkey, migrate to the East and South-East Africa for winter. The stork breeding population in Turkey is estimated to between 120.000- 150.000.

Storks are seen as a harbinger of spring, since they arrive at the same time ever year, and have begun to nest in different parts of Elbistan. Unlike a lot of birds, storks construct nests in village houses and mosques or onto poles. But their numbers are decreasing, according to farmers who await their arrival. Now, at this time of year, storks are only coming to town to restore the nests which they left last year. While spawning females storks incubate, male storks are charged with restoring the nest. In some neighborhoods of the district, including Karahüyük, Yapraklı, Güvercinlik and Izgın, storks returning to their nests have been greeted with interest by members of the community.

In particular, the nest used by a group of returning storks to Yapraklı neighborhood is remarkable. Migrating storks of the neighborhood had made a nest on a tree years ago but this had tipped over as a result of the weight of hundreds of baby storks on it. Members of the neighbourhood rushed to the aid of the storks by binding the branches of the tree with a utility pole. The storks have chosen to stay and live on the pole for the past 23 years instead of leaving the district.

Malik Ejder Elçi, an inhabitant of Yapraklı neighborhood, expressed his appreciation for being neighbors with the storks for 23 years, "I moved here 23 years ago. These storks had made nests onto the trees just beyond my house. Every year they would come and go right after they bred. However, their nests could not carry the weight of their babies any more and tipped over. We bound the branches of the tree with a utility pole to help them protect and raise their babies. Ever since, they keep on living here for 23 years. They've raised hundreds of baby storks in that time. Unfortunately, they are at risk of electrical current in rainy times now since the nest touches electric wries because of so much weight on the pole. Although that risk worries us, we are so happy to be neighbor with them."
Last Update: Apr 06, 2015 6:38 pm
RELATED TOPICS