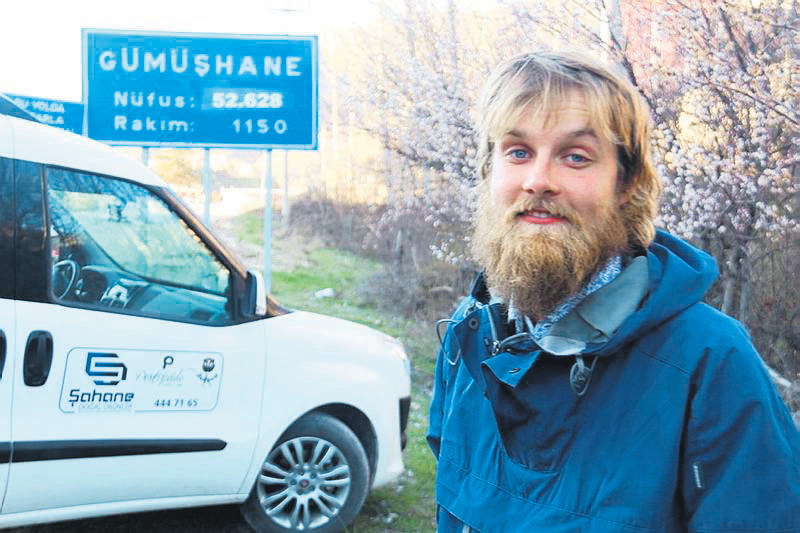 by Anadolu Agency Apr 11, 2015 12:00 am
Meigo Mark, who set off from the Estonian capital Tallinn 11 months ago on foot, has reached Gümüşhane province in Turkey. In his statement to an Anadolu Agency correspondent, Mark said that he began his walk on May 11, 2014 from Estonia. A music academy graduated, the adventurer said that he spent his time walking thinking about music throughout his journey. "I do not want to get on a plane or a train during my travels. I love nature. As my parents value sports, I walk and embrace it as a lifestyle," he said.

Mark, who said he walks over 35 kilometers a day, began his walk in Turkey from Edirne. "I have been walking for thousands of kilometers," he said, adding that Turkish people are very helpful, warm-hearted and generous. "I have walked through thousands of villages and they hosted me in every one of them. They offered me food such as tea, bread and simit," he said. Mark said the Turkish people whom he encountered on his journey gave him a new tent, shoes, jacket and socks and always filled his backpack with food. "I was hungry during my walk in Turkey," he said, expressing his gratitude. "I am happy and I walked on the roads safely. I have been in 29 countries, but Turkey is the most relaxed one," he added. Mark plans to reach Erzurum in seven days after he sets off from Gümüşhane.

Mark walked two-and-a-half hours to see Karaca Cave after arriving in Gümüşhane, but was disappointed to see it was closed. Although it was closed, the management of the cave opened it for the traveler. "I offer my thanks to the Governorate of Gümüşhane. Local people are very nice and helpful," he said. During his stay in the province, Mark visited Old Gümüşhane, which features historical churches and public baths and found it very interesting. He said: "I wonder about the lifestyles of people who lived here thousands of years ago. History fascinates me." Explaining that he loved "pestil," which is a dried fruit rollup authentic to Gümüşhane, he said he would recommend the city to everyone.
Last Update: Apr 11, 2015 1:52 am
RELATED TOPICS