Chimpanzee takes down drone with a stick 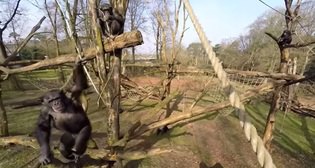 
A chimpanzee from the Royal Burgers' Zoo located in eastern Dutch city of Arnhem has taken down a drone filming for the TV Burgers' Zoo.

The footage was shot on April 10, which shows a chimpanzee, bothered by the unknown intruder, climbing to a high position and using a stick to down the drone equipped with a GoPro camera.

According to evolution theory, humans and chimpanzees belong to the same subfamily, and demonstrate highly compatible behavior.