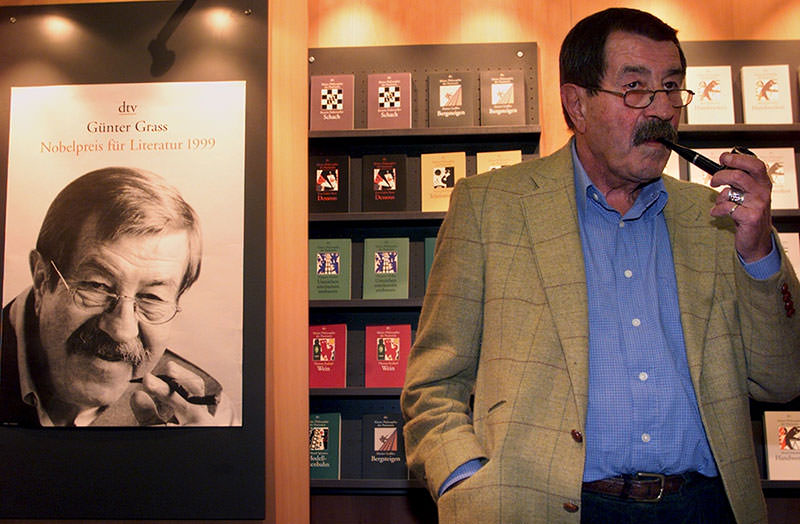 | Reuters Photo
by daily sabah Apr 13, 2015 12:00 am
One of Germany's most famous writers, Gunter Grass – best known for his 1959 novel "The Tin Drum" but whose reputation was tarnished by his admission he had served in Hitler's Waffen SS – died on Monday at the age of 87, his publishers said.

The Nobel laureate died in a hospital in the northern city of Luebeck, the Steidl publishing house said on Twitter. Grass quickly followed his debut and best-known novel "The Tin Drum" with "Cat and Mouse" and "Dog Years," all dealing with the rise of Nazism in his hometown of Danzig, now called Gdansk, in Poland.

He won a string of international awards, including the Nobel Prize in literature in 1999 and continued to publish into his 80s. Later in life, the novelist, poet, playwright and sculptor – often seen chomping on his pipe and sporting a walrus moustache – courted controversy with a provocative poem that painted Israel as the Middle East's biggest threat to peace. The prose-poem titled "What Must Be Said," published in 2012 and voicing fears that a nuclear-armed Israel could mount a "first strike" against Iran, triggered accusations of anti-Semitism in the media and an Israeli ban.

The awarded writer was well-known for his mild approach toward migration and his criticism against the U.S concerning the matter. He further expressed that Western democracy has become just an image.

Grass's works have a strong political dimension and are considered part of the German literary movement dealing with "coming to terms with the past." But he was also not averse to commenting on and stirring, controversy beyond his nation's borders.

He likened the cartoons of Prophet Muhammad that appeared in 2005 in a Danish newspaper to Nazi caricatures of Jews, and criticized ex-U.S. president George W. Bush for using religious terms to describe his "war on terror."

Grass was born on Oct. 16, 1927, in the Baltic port city of Danzig to parents who owned a grocery shop. A passionate visual artist who also studied sculpture and graphics, Grass's work and psyche were marked by Germany's past. His first three books, known as the Danzig Trilogy, are set in the ethnically-mixed region of his childhood. Danzig was handed to Poland after the war when its ethnic German population fled or was expelled.

"The Tin Drum" was adapted into an Oscar-winning film by Volker Schloendorff. Grass's 2002 novel "Crabwalk" also addressed the effect of the past on the present. Grass defined himself in a 1969 interview as a humanist allergic to ideologies of any kind "to the point of wanting to attack any belief that claims to set absolute objectives."