From taxi driver to violin craftsman 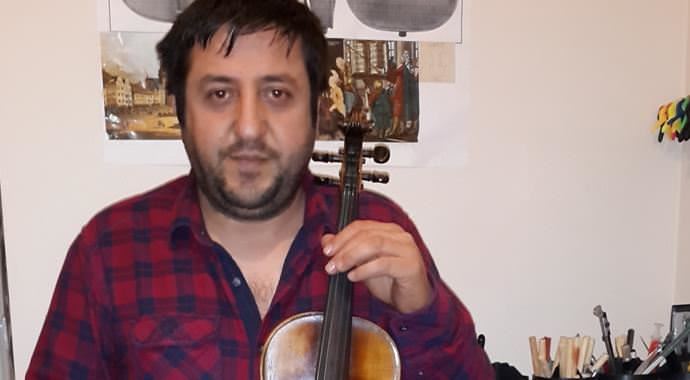 by Anadolu Agency Apr 14, 2015 12:00 am
Hasan Şanlı, 36, who is a taxi driver became a violinist after he read the biography of a famous Italian luthier and crafter of string instruments, Antonio Stradivari. He also manufactures violins for orchestras that play for well-known artists in Turkey.

Şanlı left his hometown, Tosya in the district of Kastamonu, and went to Istanbul in 1997. After working in different sectors, Şanlı began driving a taxi. One day, upon the advice of one of his clients, he read the biography of a famous Italian luthier and a crafter of string instruments, Antonio Stradivari. The taxi driver learnt that Stradivari made priceless violins in the 18th century, and began taking an interest in instrument manufacturing as he had once worked as a carpenter.

First, in order to learn how to play violin, he enrolled at the Istanbul Küçükçekmece Music Society and was mediocre at playing the instrument after just two years. Şanlı also took lessons on how to manufacture violins from various teachers. He told an Anadolu Agency reporter that he quit driving his taxi in order to pursue his interest in instrument crafting, and converted one of the rooms in his house into a workshop.

Stressing that playing the violin requires patience and determination, he said, "For a while, I played the violin for special occasions upon request. Then I conducted research on how to make a violin." The enthusiastic violin-lover met academics from the Department of Instruments at Istanbul Technical University. "When they saw how persistent and determined I was, they taught me instrument crafting in their workshops," he explained.

He underscored that the first and most important thing you need in order to make a good violin is to choose the proper wood, and it takes two months to make the instrument. Şanlı said he does not care about the price of his violins and supports talented students whenever he sees one. He now manufactures instruments for the musicians who play for well-known artists in Turkey such as İbrahim Tatlıses, Sibel Can and Kibariye.
Last Update: Apr 14, 2015 9:57 pm
RELATED TOPICS