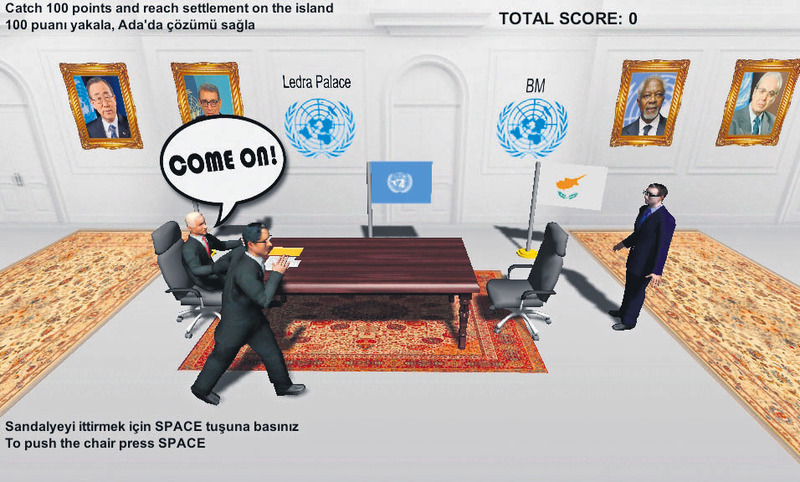 by Anadolu Agency Apr 15, 2015 12:00 am
Turkish Cypriot Nazmi Pınar has developed an online game titled "Cyprus Players" that was inspired by the dispute and peace talks that have been ongoing for many years between Turkish and Greek Cypriots. He told Anadolu Agency that the game has drawn significant attention and received millions of hits. Claiming that he has been following the talks for years as a journalist, Pınar said he was sick and tired of the talks and developed this project to reveal the course of the negotiations.

The part where Greek leader Nikos Anastasiadis runs away from the table caused eyebrows to rise in Greek populated southern Cyprus.

He claimed that the game got the attention of Greek Cypriots, adding: "I was criticized by the Greeks, as the game is one sided. They are upset about the part where Anastasiadis runs away from the table."

Pınar said that the game showed the world that Anastasiadis is the one who has abandoned the negotiations and characterized the game as a tool to reveal the isolation and embargoes imposed upon Turkish Cypriots. The game centers on the peace talks between Northern Cyprus President Derviş Eroğlu and Southern Cyprus President Anastasiadis at the United Nations building in Nicosia. The game also features Espen Barth Eide, United Nations special adviser on Cyprus.

The gamer controls the character base on Eide, and while Turkish leader Eroğlu is sitting at the negotiation table, Greek leader Anastasiadis gets up and runs away from the table. The objective of the game is to be able to make Anastasiadis sit back at the table, using Eide. When the gamer persuades the Greek leader, he or she gets 10 points, and the one who collects 100 points solves the Cyprus crisis. At the end of the game, Anastasiadis salutes the public along with Eroğlu and Eide, and fireworks are set off. The final scene of the game is accompanied by the song "We are the World," which was composed in the 1980s as a part of the aid campaign for Africa.