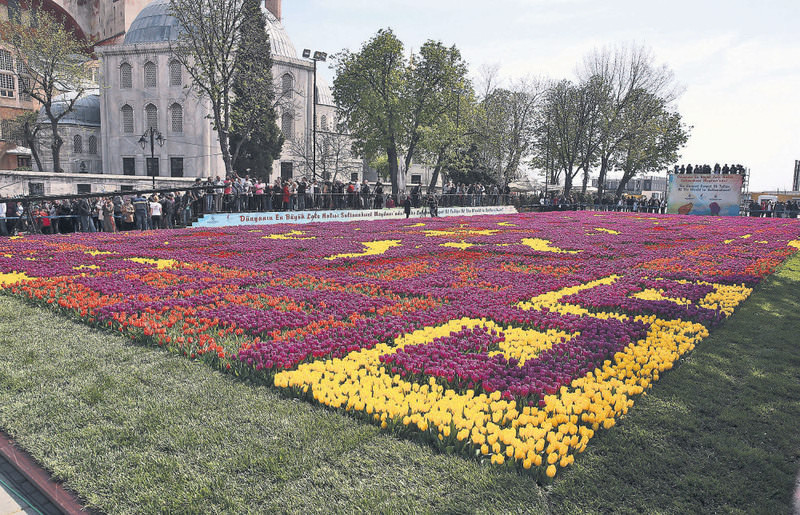 As part of the 10th annual Istanbul Tulip Festival, organized by the Istanbul Metropolitan Municipality, a 1,262-square-meter tulip carpet, which is also the biggest in the world, was made in the Sultanahmet district of Istanbul and will be on display until April 26

Organized by the Istanbul Metropolitan Municipality, the Istanbul Tulip Festival hosted a 1,262 square meter tulip carpet that was made of 545,000 live tulips. Known as the biggest tulip carpet of the world it will be displayed until April 26 at Sultanahmet. Istanbul Metropolitan Municipality Park and Green Area Directorate teams weaved the tulip carpet flower by flower in two nights at Sultanahmet Square. The carpet, which is a first in the world in terms of the living flowers it is composed of, created an outstanding sight and motif at the oldest square in Istanbul. 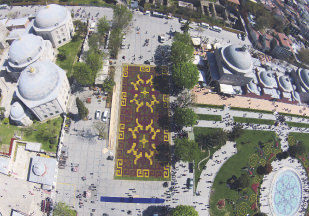 Thousands of Istanbulites and tourists accompanied Istanbul Metropolitan Municipality Mayor Kadir Topbaş during the opening ceremony of the carpet. Stating that Istanbul is a historical city that was the capital of three empires, Topbaş expressed his happiness and pride to display such a beautiful project at the intersection of the 1,400 years of the Hagia Sophia and the Blue Mosque. Topbaş stressed that Istanbul is where the sun rises in Asia and Europe at the same time and is worthy of all the beauties. "Today, we are breaking a new record together. For the first time in the world, we are displaying the world's biggest tulip carpet, which is composed of 545,000 live tulips in this historical place." He said the carpet was design by municipality teams and that although these kinds of carpets are made around the world with cut flowers, the tulip carpet in Istanbul is the first and biggest live flower carpet, which will be on display for 10 days. "This carpet will be exhibited until April 26. We invite all Istanbulites and tourists to come, take a picture and create a memory of Istanbul with tulips," the mayor added.

In 2005, the municipality launched a project titled "Tulip Comes Back Home," and in the 10th year of the project, every part of Istanbul has been decorated with tulips. "Colorful tulips, a part of Turkish culture, have blossomed all around Istanbul, heralding the spring. However, the festival is not only about planting tulips; it has become a wide-ranging festival with culture and sports activities," Topbaş said.

This year, a total of 30 million domestic produced tulips were planted all around Istanbul. Five million of these tulips were produced in villages close to Istanbul while 25 million of them were brought from various provinces and districts of Anatolia. "Millions of tulips are waiting for Istanbulites in the Emirgani Göztepe and Gülhane parks," Topbaş said, adding that many Turks as well as international tourists are traveling to Istanbul to see the tulips. "Istanbulites will welcome the future with the love of the tulip," he said.

Highlighting that tulips are not just a flower but a part of Turkish culture, Topbaş said the tulip played an important role in decorative arts, ceramics, textiles, literature and painting. "The tulip is also a symbol of all the beauties that God created for human beings. We should feel the depth of the emotions aroused by the aesthetic and array of bright colors," he stressed. "If we can feel these beauties together, I believe peace and serenity will triumph in the world. As a local government, we desire to welcome those who are visiting Istanbul with peace and send them back to their homelands with beautiful feelings," Topbaş expressed.

Following his speech, Topbaş took souvenir photographs with Istanbulites and tourists. The residents of Istanbul and tourists who felt the excitement of the spring with the blossoming tulips competed with each other to take photographs with Topbaş and the tulip carpet. Moreover, Topbaş visited Gülhane Park, which is colored with tulips and hyacinths. "Gülhane Park returned to its glorious days during the Ottoman Empire," he said.
Last Update: Apr 19, 2015 11:46 pm
RELATED TOPICS