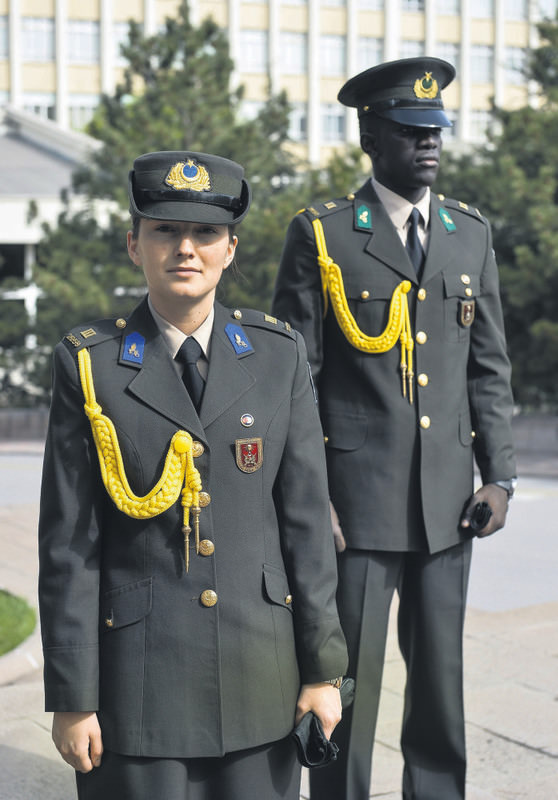 by Anadolu Agency May 01, 2015 12:00 am
The Turkish Military Academy, which has trained many statesmen, chiefs of general staff and commanders in Turkey's history, is training future commissioned officers from Asian, African and European countries in addition to Turkish officers. The academy also provides training for international students. As part of bilateral agreements, 285 students from 19 countries, including the Turkish Republic of Northern Cyprus (KKTC), Bosnia-Herzegovina, Azerbaijan, Turkmenistan, Afghanistan, Georgia, Moldova, Gambia, Macedonia, Saudi Arabia, Jordan, Libya, Somalia and South Korea, are educated at the Turkish Military Academy.

Ebou Touray from Gambia, who enrolled in the academy last year, said living in Turkey was hard for him at first as he did not know Turkish. Stating that the commanders and his friends devote close attention to him, Touray said that he learned Turkish thanks to the language school he attended. He also said they receive high quality education at the academy, and he will use what he learns for the good of his people once he graduates.

Liridona Baftijari from Kosovo said she came to Turkey in 2011. Reinforcing that Bosnia-Herzegovina and Turkey have close ties, Baftijari expressed her view that learning about Turkish culture will help her in her professional life. She emphasized that her classmates and commanders help her adapt to lessons and the school, and said she wants to be a military attache in the future.
Lt. Col. Abdurrahman Dinçbaş, who is in charge of international students at the academy, said 50 students out of 258 guest students are still taking the year-long preparatory classes. Dinçbaş added the academy enables guest students to become involved in cultural activities, and the education they receive are of equal standards and conditions to the education received by Turkish students.