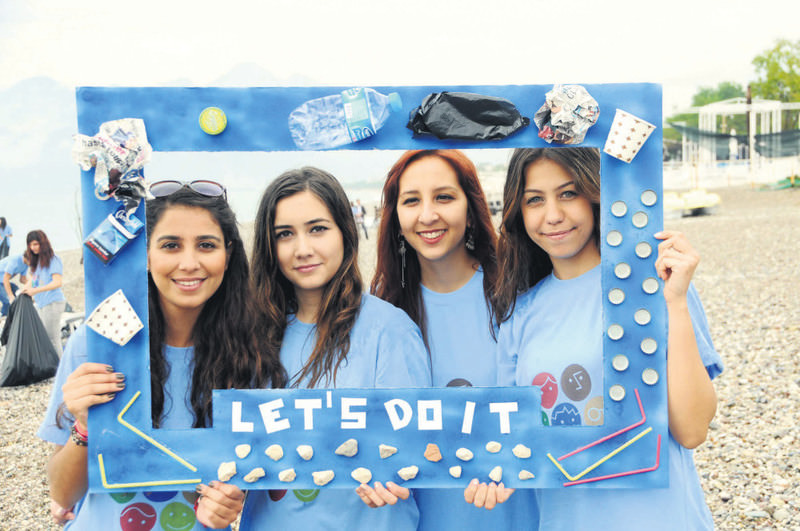 The members of Let's Do It Mediterranean, an organization spread across 22 countries on three continents bordering the Mediterranean, will conduct a sea and shore cleanup with 1 million volunteers working simultaneously on May 9. The project aims to gather 160,000 volunteers in 10 provinces in Turkey, from Edirne to Hatay

The "Let's Do It" movement began in 2008 when 50,000 volunteers came together in Estonia and collected 10,000 tons of waste in five hours. This year, the international environment movement organized an event to draw attention to shore cleanliness in 22 Mediterranean countries on May 9. Stating that they believe everybody should take responsibility for the cleanliness of the Mediterranean, Let's Do It Mediterranean Coordinator Emre Ustaoğlu said the Mediterranean is the only sea that has a shore on three continents. He added the organization is active in Edirne, Çanakkale, Balıkesir, İzmir, Aydın, Muğla, Antalya, Mersin, Adana and Hatay, and said people from every age can participate in the movement.

From Syria to the borders of Greece

Ustaoğlu underscored that the cleaning will occur in Turkey from Syria to the borders of Greece in Turkey, and said that their plan is to begin from Edirne and continue to clean all the way to Hatay. "Regarded as the biggest closed sea of the world, the Mediterranean connects Asia, Europe and Africa with its 46,000-kilometer-long shore. It is believed that there is approximately 100 million tons of waste in the world. This is not just an aesthetic problem, but is also related to health, the environment, solidarity and responsibility. We believe that we can clean the world in a day just by cleaning our doorstep," he said.

The Mediterranean is gravely threatened

Ustaoğlu stressed the Mediterranean has been under invasion by human civilization for centuries. According to the Mediterranean Sea and Coastline Status Report, the biodiversity of the region, including 30 percent of species that are unique to the Mediterranean, are threatened or endangered. Moreover, the number of invasive species is increasing due to the effects of global warming. While some of these invasive species are used for fishing, some endanger the ecosystem. Excessive fishing activities, accidental fishing or trawling, which damages underwater structures, and other methods affect ecological processes and systems, all which create pressure on the Mediterranean. Furthermore, 37 percent of coastline settlements discharge their sewage into the sea and 18 percent of wastewater treatment facilities are considered insufficient. A total of 15 percent of the world's sea traffic takes place in the Mediterranean and petroleum leaks caused by accidents pollute the sea.The event organized by Let's Do It Mediterranean is supported by governorates, coast guard commands, municipalities, chambers of commerce and industry, police department diving teams, life-saving centers, diving clubs, city councils, bicycle and student societies, nature sports groups, non-governmental organizations and political parties.
Last Update: May 04, 2015 1:36 am
RELATED TOPICS