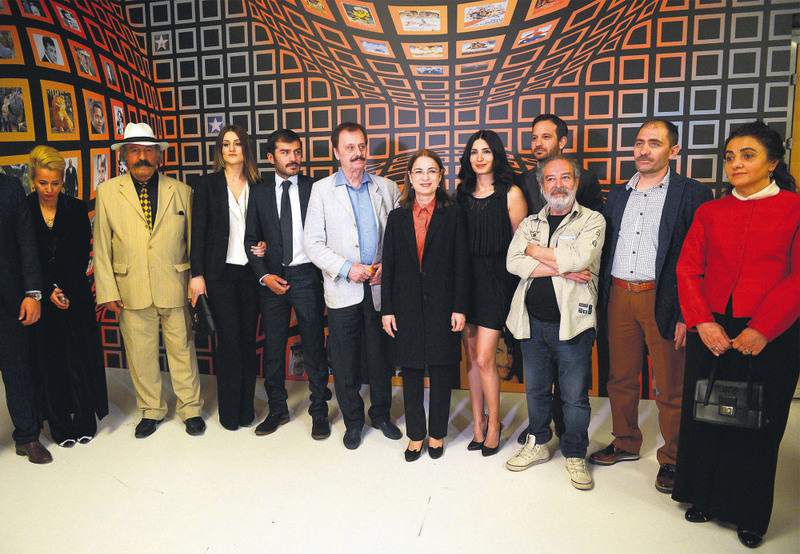 Family and Social Policies Minister Ayu015fenur u0130slam and numerous participating artists at the opening ceremony.
by Anadolu Agency May 11, 2015 12:00 am

The International Family Film Festival, where family-themed films will be highlighted, began on May 10 in Ankara. The festival will continue until May 24, offering a wide range of films from the film industries in Turkey, Iran, Japan, the U.S., India and Australia

The first International Family Films Festival opened on May 10 at the CerModern Arts Center in Ankara with a ceremony overseen by Family and Social Policies Minister Ayşenur İslam and numerous participating artists. The festival's global communication partner is Anadolu Agency, which brought cinema lovers and actors together on Mother's Day. The attending artists, including Engin Çağlar, Fatoş Güney – Yılmaz Güney's wife – Selahattin Taşdöğen, Başak Sayan and Ufuk Bayraktar, arrived at the festival area in classic cars via Tunalı Hilmi Avenue.

The festival, which will continue until May 24, was inaugurated during a ceremony hosted by actor Arda Esen, and a video that was prepared in the memory of the late actor Zeki Alasya was screened.

In her speech, İslam touched upon the death of Alasya: "We are losing the touchstones of Turkish cinema and art one by one; however, they are eternal. Although it will be hard to endure the emptiness they have left, cinema artists are immortals; they do not die." She also expressed her wish to dedicate the opening ceremony to Alasya and all other cinema artists who have passed away.İslam said individuals as well as state and art circles embrace the importance of cinema the same way, and that everybody is working hard to improve and develop Turkey's cinematic industry. "Cinema creates a fictitious world – it hosts us in it and shows us our true selves. It is very good at doing this," Islam added. "The art of cinema takes hold of our emotions and throws them in our faces, sometimes without noticing, sometimes irritatingly or satirically."

İslam stressed the significance of the family and said it is impossible to think of a society without families, which are the basic dynamic and core of a community. "Besides reverse utopias, there is almost no single concept of a society without families. Family is always characterized as the basic unit of communities. This is also important for states, as families are the best supporters of them," Islam explained. She discussed the fact that while families build social structure in society, they also create an environment for communication and pass knowledge down to the next generation. "Actually, a good and solid family structure underpins all the social services that should be offered by the state on its own," she added.

İslam presented information about the idea behind the project and thanked Medya Yapım Yayıncılık for their contributions.

Stating that the festival will be held annually, İslam underscored the organizational committee's determination to organize a festival focusing on family films and said the ministry expects artists' contributions and support.

She affirmed they had to organize the festival titled "Family" in May. "May 10 is Mother's Day, May 10-16 is Handicapped Day, May 11-17 is Family Week, May 15 is International Family Day and May 19 is Youth and Sports Day. As May hosts the most important days in relation to the concept of the family, we wanted this festival to overlap with one of these weeks," İslam explained.

Most of the films featured within the festival are accessible to the blind and deaf. Moreover, physically handicapped people will be able to watch the films with their families, thanks to the special cinema halls designed for the disabled. As part of the festival, actors and artists will visit elderly people in rest homes as well as orphaned children. They will also organize workshops and help raise awareness in society for the plight of the disabled.

Highlighting that all the films featured in the festival were chosen from among family-themed films, İslam said the festival will screen newly-premiered films as well as an important selection of world films.

Following the speeches, the ceremony continued with the distribution of certificates for the tree plantation in the Atatürk Forest Farm and Zoo's Yeşilçam Memorial Forest, and ended with the screening of the film "Güle Güle" (Bye Bye) starring Alasya.

The festival offers a wide range of films from the cinemas of Iran, Japan, Hollywood, Bollywood and Australia. Furthermore, various art events featuring painting, photography, theater and modern arts will be held as part of the festival, and, young people will be actively integrated into the festival through events and trainings.
Last Update: May 11, 2015 11:10 pm
RELATED TOPICS