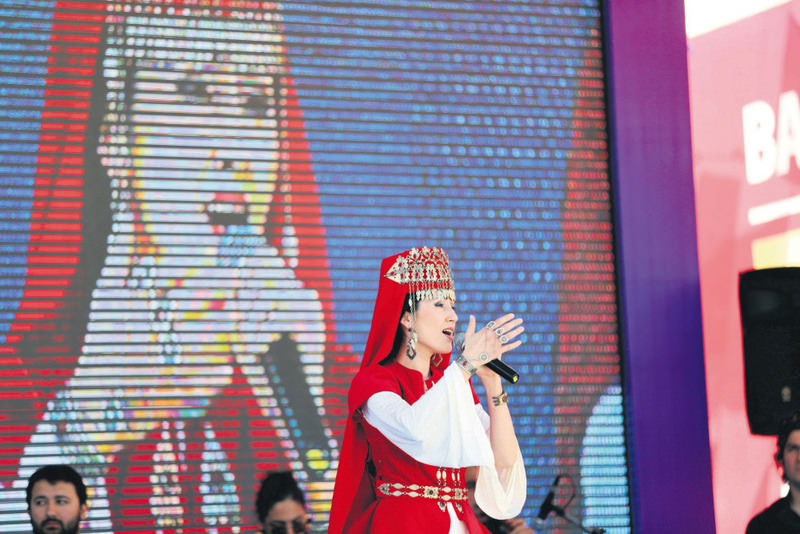 by Anadolu Agency May 11, 2015 12:00 am
Organized by the Union of Turkish World Municipalities (TDBB) and the Women and Democracy Association (KADEM), the International Lullaby Festival took place on Sunday in Istanbul's Esenler district. The event, which was held on Mother's Day, offered an unforgettable day to mothers and babies with 13 artists singing the traditional lullabies of their countries.

The festival, which was organized in Turkey for the first time, took place at Esenler Dörtyol Square. The festival drew intense attention and many observed babies falling asleep as the artists sang their lullabies.

Speaking at the festival, Esenler Municipality Mayor Mehmet Tevfik Göksu stressed the importance of lullabies. "We believe that one day is not enough to remember or understand mothers. However, Mother's Day is an important day to focus on mothers' rights. We taught a lot about what to do on Mother's Day as Esenler Municipality and the idea of this festival came up," Mayor Göksu said. He said that while the most beautiful thing for a mother is to sing a lullaby to her baby, the most valuable thing for a child to hear is his or her mother singing. "We wanted to bring these two concepts together. In other words we wanted to give this day a meaning by bringing mother and child together," he continued.

Artist Saydyko Fedorova, who came to the festival from the Sakha (Yakutia) Republic and stood out with her instrumental work, said that it was the first time she had participated in such a festival. "There were no festivals for lullabies in the world. This is a very entertaining festival and I love lullabies. We also sing songs and lullabies in Yakutia. The instrument I play is 'homus,' which is the traditional instrument of my country," she explained.

Artist Ayşe Tural, who comes from the Turkish Republic of Northern Cyprus (KKTC), underscored that lullabies are very important in her country. "People in the KKTC place great importance on lullabies because babies grow up with a mother's love. If a baby feels the warmth of a mother's love, they can become a happy and successful child when they grow up," she said. Rida Timersayehova, an artist who came from the Republic of Bashkortostan, said she was happy about singing lullabies that her grandmother used to sing to her.
Last Update: May 11, 2015 11:13 pm
RELATED TOPICS