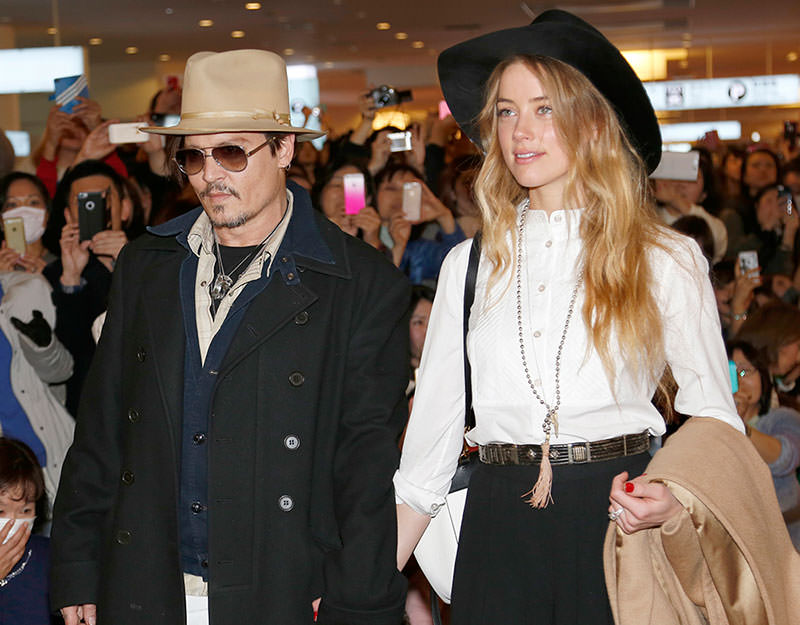 | AP Photo
by Anadolu Agency May 14, 2015 12:00 am
Australia has threatened to kill Johnny Depp's dogs. The country's minister for agriculture has warned the American film star that if he does not remove his two cocker spaniels from the country within the next 36 hours they will be "liquidated."

"It's time that Pistol and Boo buggered off back to the United States," Barnaby Joyce stated Thursday.

Depp is reported to have failed to declare the dogs to customs when he and his wife returned to Queensland by private jet last month.

Depp has been based on the Gold Coast filming Pirates of the Caribbean 5: Dead Men tell No Tales, but took time out from the set to fly home to seek treatment for a hand injured during filming, according to the Sydney Morning Herald.

"He has decided to bring to our nation two dogs without actually getting proper certification and the proper permits required. Basically, it looks like he snuck them in," Joyce told reporters.

"We found out he snuck them in because we saw him taking them to a poodle groomer."

Australia's ports and airports have some of the toughest screening measures in the world. The country has extremely tight biosecurity laws, given that much of its flora and fauna is unique, and some have no resistance to foreign disease or bacteria.

The quarantining of dogs is enforced very strictly as some have been found to carry rabies. The minimum period for animals entering Australia is 10 days

Joyce, however, said Thursday that he would not now offer Depp the chance of putting his dogs in quarantine.

"I'm dead against that idea, and this idea that I break the law and then we go in another direction just because I'm a movie star; I don't like that.

"Mr. Depp has to either take his dogs back to California or we are going to have to euthanize them. He's now got about 50 hours left to remove the dogs," Joyce said at 8 a.m. Australian EST Thursday (2200GMT Wednesday).

Groomer Lianne Kent -- who works in the Gold Coast salon that catered for the dogs -- told the Brisbane Times on Thursday that Depp and his wife must be going through a very difficult time.

"I'm upset about it. I feel sorry for them... I can't imagine what they'll be going through."

She added that dogs are usually in a "messy" state when they are brought to the salon, but Pistol and Boo "looked beautiful" and smelt "amazing."

"I did a full groom, bath and trimming. They were just gorgeous dogs -- they'd just sit there," she said.

Joyce, however, does not appear as taken, underlining Thursday that just because the owner of the dogs is Johnny Depp "does not mean he's exempt from Australian law."

He told 612 ABC Brisbane that there is a process if people want to bring dogs into the country.

"You want to bring animals in, you get the permits, they go into quarantine and then you can have them," he said.

"If dogs come in and they have rabies... the whole life in Brisbane changes," he warned.

A change.org petition was set up Thursday morning named "Save Johnny Depp's dogs from being euthanized [sic] by the Australian Government!"

In just three hours it had gathered more than 1,500 signatures.

As of 10.00 GMT, if Depp does not remove Pistol and Boo and Joyce is true to his word they have just 38 hours to live.