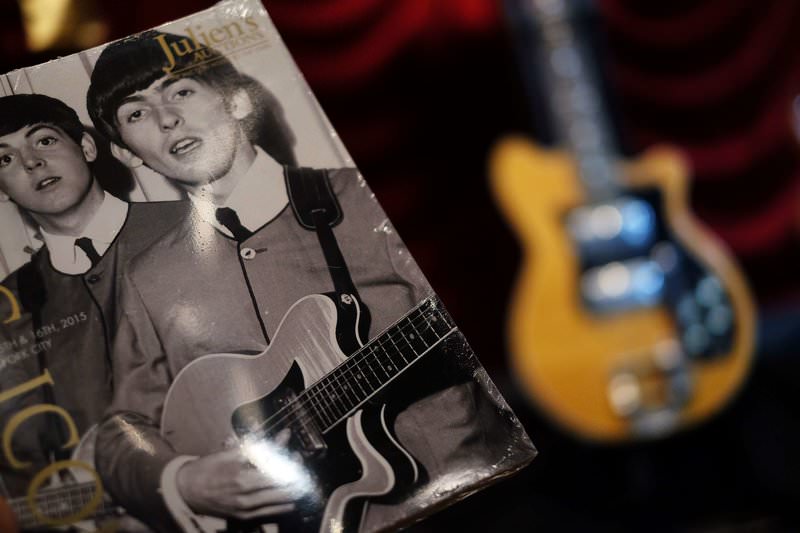 Harrison's guitar, which was made in 1963, was amid hundreds of possessions once owned by rock 'n' roll's biggest stars in the auction held at the Hard Rock Cafe in Times Square.

Harrison, who died in 2001, borrowed the guitar while his was under repair and was photographed and filmed playing it at concerts, said Martin Nolan, executive director of Julien's Auctions.

"It was played by Harrison in the Cavern Club in the early 60s," said Nolan, referring to a Liverpool nightclub that gave birth to the world's biggest band.

The guitar is being sold by a collector in Britain who had loaned it to the Beatles museum in Liverpool, where it became a "great draw," Nolan said.

The highlight of the sale at the Hard Rock Cafe on Saturday is a state-of-the-art tour bus bought by Elvis Presley for his back-up band, J.D. Sumner and the Stamps, in 1976, the year before he died.

Valued at $100,000 to 200,000 and refitted with dusty peach soft furnishings, the bus still has Elvis' "Takin' Care of Business" motto and a lightening bolt emblazoned on the outside.

Other stand-out items include an Eric Clapton guitar valued at
$30,000 to $40,000 and outfits worn by Michael Jackson.