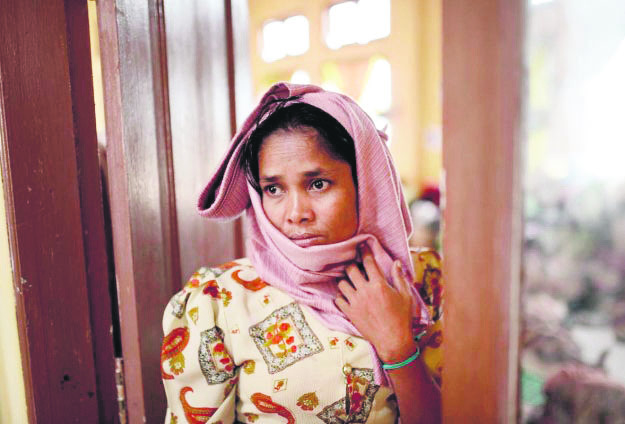 by Anadolu Agency Jun 02, 2015 12:00 am
Mustafa, an Indonesian fisherman, recounts his story of rescuing around 700 migrants from Myanmar and Bangladesh off the coast of Indonesia's Northern Sumatra.

"I didn't think she'd remember me," an Acehnese fisherman told Anadolu Agency on Monday. Two weeks after a Kuala Langsa man, Mustafa, helped rescue around 700 Myanma and Bangladeshi migrants from the sea off the coast of Indonesia's Northern Sumatra, he visited a refugee camp in his area. The migrants - desperate to reach Indonesian or Malaysian shores - were reported to have jumped into the sea from smuggler's vessels around 64 kilometers off the coast.

Walking around the camp, Mustafa said he was amazed that so many people remembered him from that May 15 night when he stretched out his thick fisherman's arms to bring those suffering in the choppy waters onto his boat.

"When we first discovered them, they were crying of hunger and thirst; many of them were wounded," he said. He told AA that he was suddenly accosted by a Rohingya woman - Rozia, he later discovered was her name - who stepped from a crowd and presented him with a box. "It was heavy. I immediately wondered what was in it," the 23-year-old fisherman said. And then as he looked at her and the container, he remembered that he had given a starving Rohingya woman a packet of noodles while she shivered on his boat.

"I was shocked. It contained two pieces of rukuh [a prayer robe for women], one kilogram of sugar, tea, instant noodles, soap and shampoo."

He said he was immediately touched by the gift and thanked the woman profusely, as he never thought that the refugees would remember him and the other fishermen given how traumatic the rescue was for them.

"As I walked around, many others started to wave, shouted greetings or called me in their own language," he said, eventually agreeing to sit in a refugee tent and share whatever food they had. Many of the migrants staying in Kuala Langsa have fled Myanmar's western Rakhine state alleging brutality by the country's military leaders, while others claim to have been forced onto the boats by people smugglers who then demanded ransoms from their families back home for their safe passage.

Since 2012, the Rohingya - who the United Nations consider to be the world's most persecuted ethnic minority - have been fleeing Myanmar in droves, fearing violence that some human rights groups consider to be state-sponsored.

Now, Muslim children in the Indonesian camp are reported to be using the experience to learn new languages, according to a report in Harian Aceh newspaper on Monday.

The website reported a 10-year-old Rohingya child named Hossen as saying that he and other displaced children are learning Indonesian and Acehnese from around 30 volunteer teachers, and he has already been able to memorize a few simple words in Indonesian like eating (makan), mosquitoes (nyamuk) and shower (mandi).

Beside writing and reading, they will also learn sewing and cooking. Hossen told Harian Aceh that after seeing many people in his village in Western Myanmar killed, he had run away with his 15-year-old sister and 12-year-old brother in the hope of getting to Malaysia where their elder brother works. He said they boarded a boat from Myanmar's Rakhine state, which took them to a larger vessel filled with hundreds of Rohingya refugees and Bangladeshi migrants.

The website reported that they were at sea for nearly four months with extremely limited supplies, until they were rescued by the Aceh fishermen.
Last Update: Jun 02, 2015 11:38 pm
RELATED TOPICS