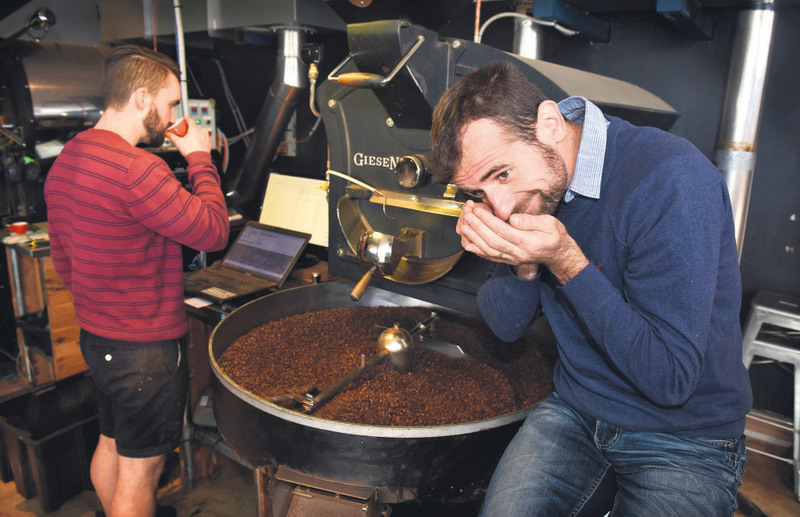 Coffee maker and cafu00e9 owner Sasa Sestic (R) at his roasting facility in Australia's capital Canberra.He won the World Barista Championship this year.
by Jun 08, 2015 12:00 am

Australians are world-renowned for their love of beer. But their passion for a different type of brew, coffee, is what has been making global headlines recently. They use different techniques and special ingredients, adding to the country's growing coffee industry

Sasa Sestic, from the capital Canberra, is the second coffee maker from Down Under to win the World Barista Championship in the competition's 15th year which drew national champions from some 50 countries.

Young, driven and keen to shake up the coffee scene, Sestic, like many of his Australian peers, is helping to shape global tastes in the brown beverage.

He wowed international judges at the annual competition in the United States in April, using winemaking techniques and a special ingredient – shiraz viognier grape juice sourced from a Canberra vineyard -- to become the surprise champion.

"I started competing initially to learn and the major reason I have been competing for the last two years is to bring a message to the coffee industry – that I can potentially improve our industry and make it better," Sestic told AFP about his desire to encourage innovative approaches to coffee-making.

"Those 15 minutes in Seattle in the finals were my biggest moment, the best in my coffee career. Even if I finished at number two, three or four, I could not have done things any better."

A wave of post-war immigrants from Turkey, Greece and particularly Italy has long seen Australia embrace the bean culture.

But more recently, its citizens have been driving innovation in the sector through more sophisticated espresso-based brews and vibrant cafe experiences, said Australian Specialty Coffee Association's Brent Williams, who has served as a judge at the barista championships.

"A lot of the younger generation that have come through have moved away from the beer-style culture, especially the urban dwellers," Williams told AFP, adding that there was a growing thirst for new coffee experiences.

"Italians have their particular way of doing coffee and they are very rigid in making sure that it stays to the Italian tradition, whereas Australia and New Zealand are quite international countries.

"So they are making coffee and developing it so that it suits international requirements."

Sestic, a former Australian Olympian in handball, was born in Bosnia and lived in Serbia before moving Down Under at 18 with his family. He has been unable to step away from coffee machines since he began working with one in 2001.

Now 37, he runs a Aus$10 million (US$8 million) business that includes three Canberra cafes and a wholesale green-bean company connecting coffee farmers in developing countries with international clients in countries such as China, Hong Kong and Malaysia.

Entrepreneurs like him have thrived as Australia's robust coffee market goes from strength to strength, even during slower economic periods, expanding at an annualized 3.2 percent over the past five years, market researcher IBISWorld said in an April report.

More of a brewers than growers market, the domestic industry was estimated to have generated Aus$4.3 billion in revenue over the 2014-15 financial year, IBISWorld added.

The report noted the Australian market was "highly fragmented and traditionally encompasses a larger number of single-establishment owner-operated cafes." As a result, prominent chains have struggled to find favor with the country's sophisticated coffee clientele.

Starbucks, which dominates some international markets, saw its Australian operations lose money in the years after its first store opened in Sydney in 2000. The chain was taken over locally by Australia's 7-Eleven owners, the Withers Group, in 2014.

"It's more standardized in Starbucks," Neville said of the way the coffees are made. "I also think that as a perception, you get a more genuine product from a local cafe, whereas from a major chain, you get something that's more artificial or prefabricated."

Australian tastes have instead invaded Starbucks, with the company introducing the "Flat White" – steamed milk poured over one or two shots of espresso, believed to be an Antipodean invention – to its American menu in January.

Meanwhile, Australian entrepreneurs are finding friendly taste buds in New York, opening a string of cafes there, named after streets in the southern city of Melbourne.

They followed in the footsteps of coffee roasters Toby's Estate. New Yorkers were quick to embrace its Australian-style brews, and just several months after opening a cafe in trendy Williamsburg in 2012, Toby's Estate was nominated as a top pick in a local coffee guide book."The coffee is rich and intense, and so very Australian," was another nod, from the New York Times.

Toby's Estate has also expanded to Singapore, with Asia seen as a promising market where middle-class consumers are seeking out Western-style coffees.

Sestic, who sources beans from 10 countries and 50 farmers, is hopeful he can bring his Australian cafe experience to Asia.

"We are so far away from coffee farms – from Brazil, Central America, Africa – but yet we are one of the leaders in the world in specialty coffee," he said.

"I believe what we have in Australia is very special, very diverse and pretty amazing."
Last Update: Jun 08, 2015 1:23 am
RELATED TOPICS