Schwarzenegger is back as the "Terminator" 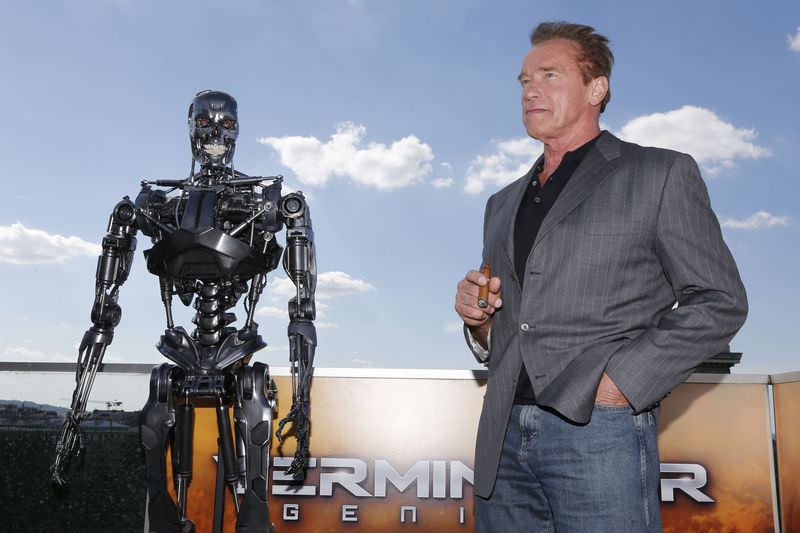 Actor Arnold Schwarzenegger poses for photographers at a preview of his new film, 'Terminator: Genisys', in Paris, France, June 19, 2015. (AP Photo
by Jun 19, 2015 12:00 am
The 67-year-old action star Arnold Schwarzenegger announces that he is "back" as the Terminator in "Terminator Genisys", the new sequel to the sci-fi film series, in a promotional media conference in Paris on Friday.

Schwarzenegger, revealed some secrets from the movie, which will hit the screens next week in Scandinavia, Greece, Turkey and Singapore, and the rest of the world in early July.

First up, he told reporters that "I got the phone call a month after I'd finished my governorship" -- his seven-year stint running California, which ended in January 2011 -- to return as the killer robot.

He then explained that a key scene in the movie sees him fighting a younger version of himself.

In it, he is an older Terminator battling the one he played back in 1984, when the original "Terminator" came out, a struggle made possible by the time travel conceit of the series -- and modern special effects.

His appearance as a Terminator visibly three decades older was explained in a "very well-written" way, he said.

The production hired a bodybuilder with "a Mr Universe physique" to play the younger version of Schwarzenegger in the fight and then spent a year using computer graphic overlays to make him look like the first Terminator.

"When I saw the movie for the first time three weeks ago I was literally blown away, to see myself fighting me and to see exactly the way I looked in 1984," Schwarzenegger said.

He said his young face had to be recreated. Not "one single frame" was taken from the first Terminator movie, because it is owned by a different production company, he explained.

"It was really extraordinary to watch that. I didn't actually know when I saw the fight who I should root for," he said.

Schwarzenegger also spoke about how movie magic was making it possible for him to keep going in other action roles at an age that many men are enjoying retirement golf.

He said, for instance, that he is reprising his title role from "Conan", the first feature movie he made 35 years ago, for an upcoming sequel.

"All of this is very unusual, because normally when you watch movies such as 'James Bond' or 'Batman', they switch out the actors every five, six or 10 years."

But, the former bodybuilder grinned, "when you have a studly body, you shouldn't be surprised".