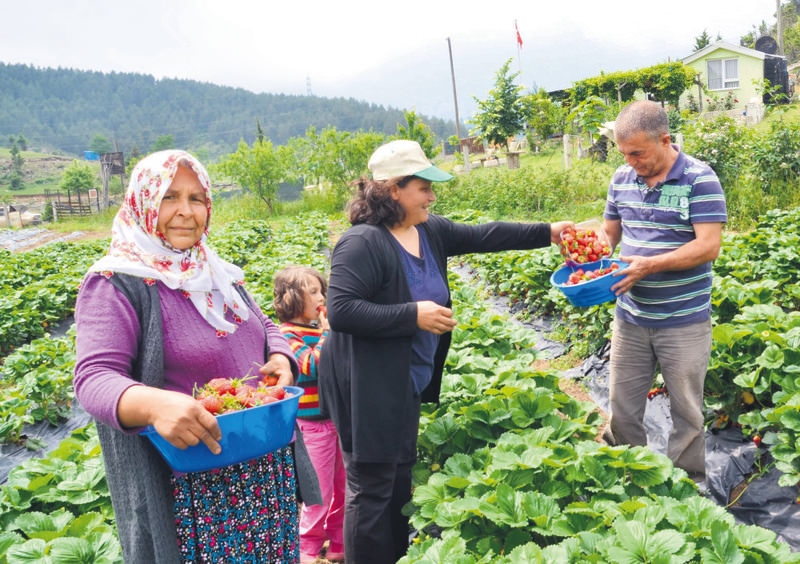 by daily sabah
Jun 23, 2015 12:00 am
Residing in Kahramanmaraş's Pınarbaşı neighborhood in Andırın, Nilgün Kayran planted five strawberry seedlings on her balcony for decoration four years ago. Soon, she became an entrepreneur and established a strawberry garden over a 1.5-hectare area. Kayran, who became a strawberry producer, even though she first bought strawberries purely for decoration, expects to harvest five tons of strawberries from her gardens. Kayran said her dream, which involved planting her own garden, started with a few flowerpots. She said she turned her own field into a strawberry garden and continued, "I thought about planting five seedlings that I bought from the market into my field. Currently, I have 5,000 strawberry seedlings. God willing, this year we will collect five tons of strawberries from this garden." She said she does not face hardships when it comes to marketing and said that she sells her strawberries to Kahramanmaraş, Adana and Mersin. Kayran expressed her happiness as she sells strawberries to provinces like Adana and Mersin, as they are known for their fruit production. She concluded by saying that her aim is to enlarge her production area.
Last Update: Jun 24, 2015 1:00 am