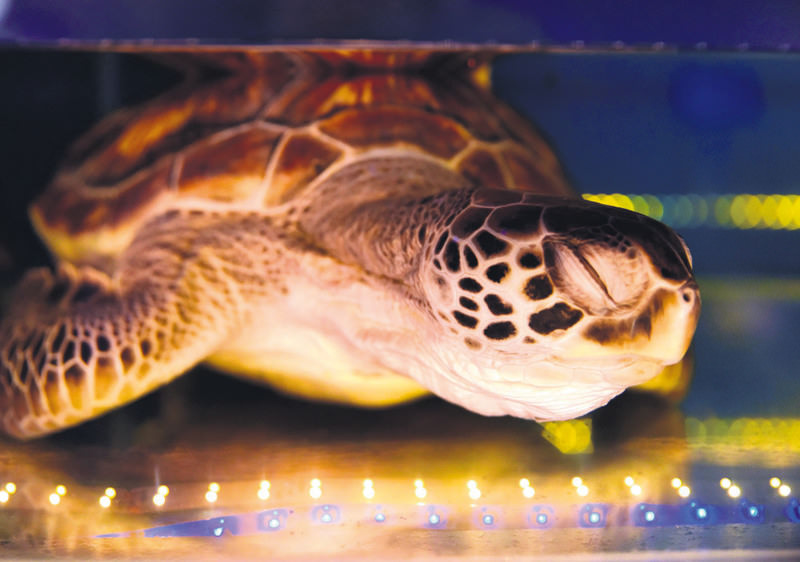 by Anadolu Agency Jul 10, 2015 12:00 am
The Antalya Marine Biology Museum, which displays more than 500 different kinds of sea animals including species that face extinction, such as the angular roughshark, stellagama and loggerhead sea turtle, is getting ready to host the Marine Biology Festival.

Organized by the Antalya Metropolitan Municipality and supported by the Scientific and Technological Research Council of Turkey (TÜBİTAK) and Turkish Marine Research Foundation, the Antalya Marine Biology Festival will be held next year, Curator Elif Özgür Özbek told an Anadolu Agency (AA) reporter.

Saying that they have already begun the preparations for the festival, Özbek highlighted that their aim is to help people embrace marine culture and raise awareness for natural heritages. She added that they invite everyone to take part in the festival, and continued: "As a part of the festival, there will be guides detailing our seas, sea pollution, endangered sea animals, sustainable fishing, invader species and the ecological and economic importance of the seas. Moreover, panel sessions, educational seminars and photo and painting competitions will also be held."

The festival will feature an exhibition of life-size model sea animals and creative drama classes as well as workshops and educational trainings intended for children. Furthermore, the organizers plan to make the entrance to the museum free of charge for visitors throughout the festival. "Our target is to raise awareness among people and students. We want to instill love for marine culture to people in order to be able to protect our seas and marine life," Özbek said.The museum, which was opened nearly one-and-a-half months ago, has attracted 15,000 visitors so far. Özbek highlighted that one-third of the museum's visitors are students, as teachers impart lessons, such as the classification of species through the rich visual material that the museum offers.
Last Update: Jul 10, 2015 9:30 pm
RELATED TOPICS