Cyclists to pedal from Muğla to Brussels 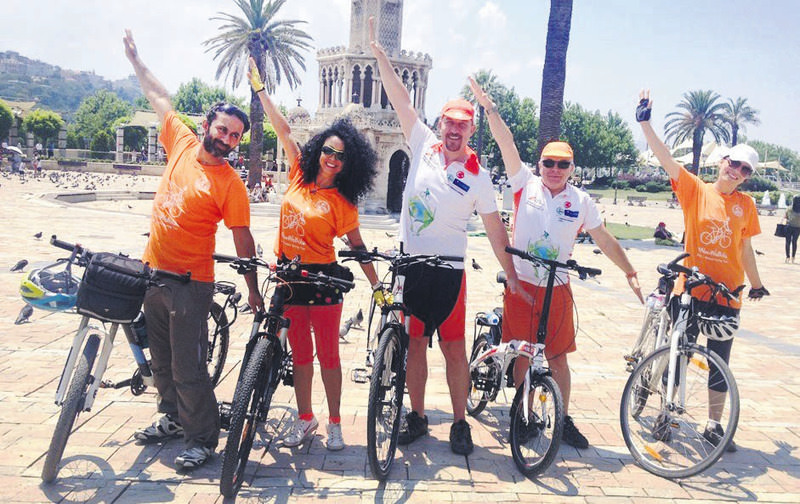 by Daily Sabah Jul 13, 2015 12:00 am
Aiming to draw attention to the importance of exercising, a group of cyclists set out on a EU-supported, 2,700 kilometer-long journey starting from the southwestern Turkish province of Muğla. Speaking at a press conference held in İzmir's Konak Square with his team members, the coordinator of the European Cycle Route Network (Eurovelo) in Turkey, Feridun Ekmekçi, said he is both an academic at Muğla University and the president of the Muğla Energy Efficiency and Environment Protection Union (ENVERÇEVKO). He added that as people who consider cycling a huge part of their lifestyle, they are doing their best to see Turkey participate in international cycling and sport organizations.

Stressing that they came up with the idea of organizing an international cycling tour called the "Tüm Rotalar Brüksel'e Çıkar" (All Routes Lead to Brussels) as a part of the European Cycle Route Network last year, Ekmekçi said the International Sport and Culture Association (ISCA) decided to support them within the framework of the "Şimdi Hareket Zamanı" (Now We Move) campaign, which is one of Europe's most important sporting organizations.

He also said the project is supported by the EU, and will be launched this year with a team of four – two academics, one doctor and one teacher – beginning next week in Muğla on July 24. The bicycle tour will follow the European Cycle Route Network and the tour will conclude in Brussels on Sept. 9 after the participants have cycled for 45 days and 2,700 kilometers. Emphasizing that he and his teammates will participate in the events organized by local governments and nongovernmental organizations (NGOs) that support them on the road, Ekmekçi said: "After Muğla, we will complete the tour's stages in Didim, İzmir, Akhisar, Bursa-Nilüfer, Istanbul-Kadıköy and Edirne. In the following stages, we will head to Brussels after visiting Plovdiv, Thessaloniki, Skopje, Belgrade, Osijek, Budapest, Bratislava, Vienna, Prague, Frankfurt and Maastricht."
Last Update: Jul 13, 2015 9:46 pm
RELATED TOPICS