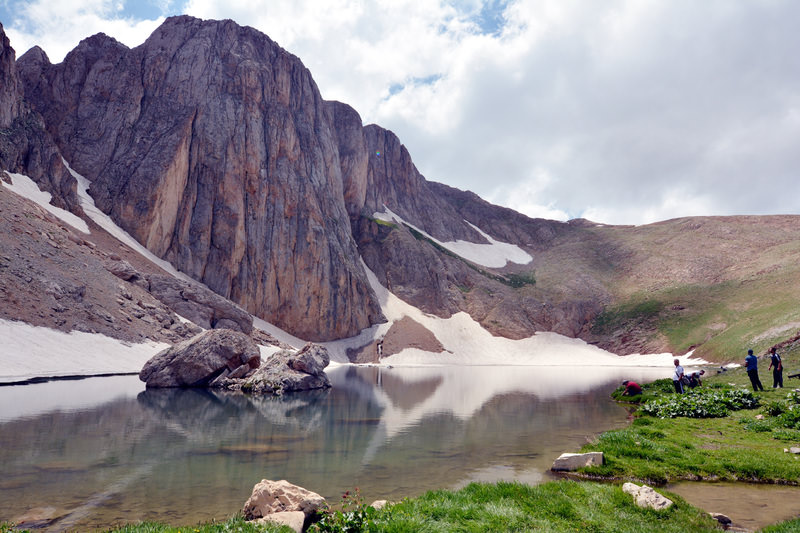 by Daily Sabah Jul 16, 2015 12:00 am
A group of nature lovers visited the Buyer Baba Lake, which is located nearly 3,000 meters above sea level in the Eastern Anatolian city of Tunceli as part of the push to increase the number of nature trips per the resolution process. Nature trips in Tunceli, which aim to bring the natural and historic beauties of the city to light and promote them, have been ongoing since it began at the end of April. As part of the trips, which are generally organized by the Dersim Travelers Group, the group visited a region where the Buyer Baba Crater Lake is located.

Nature lovers who arrived at the lake in Tunceli's Pülümür district after three hours of climbing enjoyed playing in the snow in the middle of summer as well as beautiful nature.

Hailing from Istanbul, Sonay Yılmaztürk told an Anadolu Agency (AA) reporter that she has been trying to learn more about nature by attending the trips held in Tunceli for one month. Stating that she has always wondered about the natural landscape in Tunceli, Yılmaztürk said: "There had been a tense environment for many years here, but now it is peaceful following the resolution process. We have the chance to travel easily and enjoy the outdoors thanks to this process. We are at Buyer Lake today, and although it is July, there is still snow here. It is a very beautiful environment that is beyond my dreams and imagination. I want everybody to come and see it." Tülay Çelik from Elazığ said she attended a nature trip held in Tunceli for the first time. "You will see that nowhere has this kind of beauty. It took a long time to climb, but I am happy now. I didn't know that my country has such beautiful places. I would like to come here once more. I want everybody to come and see its beautiful nature," Çekil said, emphasizing how lucky she feels.

Songül Kızıl lives in Ankara and has always wanted to see Tunceli's nature. She said: "We couldn't come here before because of security problems but we always wondered what it looked like. We used to see it in the media and imagined it is a very beautiful place. But after I came and saw it for myself, I discovered that it is much more beautiful. It is beyond expression. It has amazing nature and everywhere is wonderful. It is a peaceful environment with all sorts of flowers. I have never seen such beauty anywhere before. I visited at least 12 countries in Europe and went to Cuba, which was very beautiful, but this place is even more beautiful than Cuba." Saying that she previously couldn't even dream of climbing the Munzur Mountains, Kızıl expressed how happy the beauties she witnessed made her. Kızıl invited all nature lovers to Tunceli to see them for themselves.
Last Update: Jul 16, 2015 10:35 pm
RELATED TOPICS