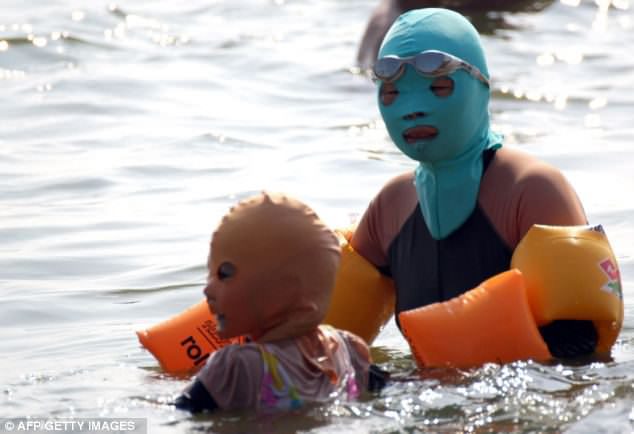 by Jul 19, 2015 12:00 am
What do Chinese women do when they want to go swimming but maintain their pearly-white complexion?

They put on a mask made for the beach, and fondly known as a face-kini.

A pale complexion is highly prized as delicate and feminine in China while dark skin suggests tanning caused by farming the fields or other lowly, outdoor work.

The face-kini appeared in 2004 on the beaches of the coastal city of Qingdao, in response to demands for full protection from both the sun and from jellyfish stings.

The inventor, former accountant Zhang Shifan, told Reuters she never imagined here mask would become so popular with about 30,000 of them sold over the past year.

But there's a hitch.

The masks make people look like zombies and scare children, Zhang said. "In the past, I really wanted to do everything I could to avoid scaring people," said Zhang, who owns her own swim-wear shop.

She said she had considered a whole range of different colours but they all looked scary, so she decided to borrow the colourful face-paint designs of traditional Peking Opera. "So little children might not be so scared," she explained.

Zhang is hoping her new line will add to her business which has been so successful that counterfeits have cropped up across the country.

For 64-year-old Wang Baoyu, one of Zhang's loyal customers of nearly 10 years, nothing beats the original. "This store is authentic and I rode the bus for more than an hour to come here. I wouldn't dare buy one from a street vendor as I'm afraid of buying a counterfeit," Wang said.

To be sure, the face-kini isn't for everyone.

Zhang Xing, a 31-year-old beach-goer, said she would never wear one but nevertheless, she had praise for inventor Zhang and her new design. "She really is someone who is full of ideas," she said."She's able to make something that can both protect people's skin and blend it with traditional Chinese culture."