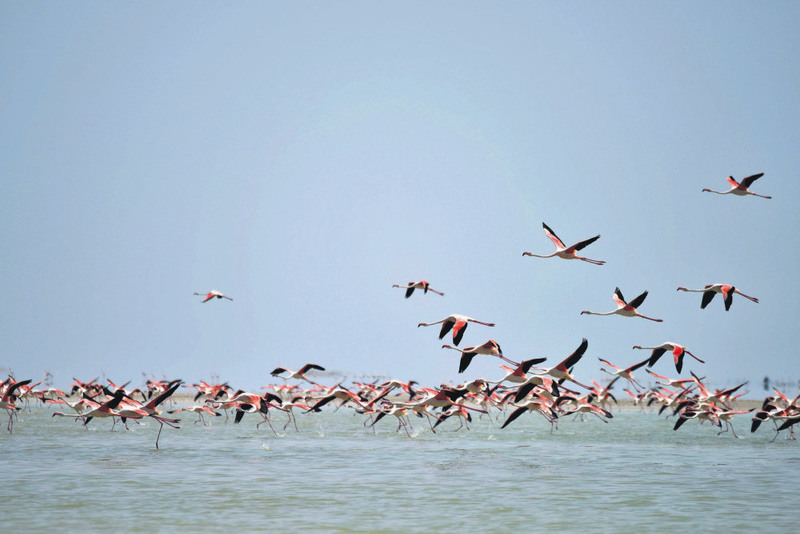 Thousands of flamingo chicks recently hatched near Lake Tuz, home to the largest flamingo colony in the Mediterranean Basin. Lake Erçek, which is also a popular stopover for migratory birds during their journey from North Africa to Iran, harbors 230 different bird species and offers a visual feast of flamingos in July

Turkish lakes located in different parts of the country have become tourist hotspots for those seeking to catch a glimpse of migratory birds, especially during summer season. Lake Tuz, one of the largest hypersaline lakes in the world that is located in the Central Anatolia region, and Lake Erçek, a salt lake in eastern Turkey, are two of the most popular, which host large migratory bird groups including flamingos.

Niyazi Alçay, the mayor of Aksaray's Eskil Municipality, which is located to the south of Lake Tuz, spoke to an Anadolu Agency (AA) correspondent on the subject and explained that Lake Tuz is located in the middle of the Anatolian steppe, which provides a perfect habitat and hatching ground for flamingos. He said Lake Tuz is like a heaven for flamingos living in the Mediterranean Basin, but whether flamingos hatch in the area or not depends on the water level of the lake.

"Flamingos usually choose to lay their eggs in salty and wet areas. As Lake Tuz is isolated from humans and a safe place for animals, the area hosts tens of thousands of flamingos every year," Alçay said. Flamingos mostly feed on artemia salina, tiny shrimp-like marine animals that live in salty waters. Flamingos come to the area during winter to lay their eggs if the water level is suitable for their offspring to hatch. While the number of flamingos laying eggs in the area decreases during drought years, this number increases greatly if the water level of Lake Tuz is higher, meaning the number of flamingos that lay eggs in the lake changes every year. "The Doğa Foundation locates and confirms the number of hatched baby flamingos every year through scientific studies," Alçay stressed.

According to the foundation's data, While 5,000 baby flamingos hatched in 2005, 4,000 in 2007, 14,644 in 2009, 18,418 in 2011, 20,275 in 2012 and 22,000 in 2013, only 2,650 baby flamingos hatched in 2014. Alçay said they closely monitor the ecological system of Lake Tuz, and confirmed that they will continue their work to turn the region into a bird paradise. "As the water level of the lake was low last year, the number of baby flamingos that hatched decreased dramatically. According to our initial observations, we hope that this year, the number will rise. Thousands of flamingos hatch and open their eyes to the world in Lake Tuz. Moreover, the lake is also home to thousands of adult flamingos," Alçay said. He added that the lake is reminiscent of a flamingo paradise, underscoring that although many baby flamingos died due to low water levels last year, this year none of the babies died. Alçay said baby flamingos train all summer to learn how to fly and then they migrate to southern countries.

Lake Erçek, which located in Van Province, is one of another popular stopovers for migratory birds passing through Turkey. During their journey from North Africa to Iran, migratory birds – especially flamingos – stop there for a short stay each year. With rising temperatures, migratory birds now prefer wetland areas around the southern Anatolia region. Located within the Lake Van basin, Lake Erçek is an important wetland area and harbors 230 different bird species. In July, the lake offers a visual feast with migratory flamingos. Associate Professor Özdemir Adızel of Yüzüncü Yıl University's (YYÜ) Department of Biology told an AA reporter that Lake Erçek is an important feeding area of flamingos, and they will stay around the lake until October. He said that migratory birds that come in the summer months are generally lacking in reproductive maturity or those who begin their journey after mating. "There are around 7,500 flamingos in Lake Erçek. They will continue to come here in groups and their number will probably reach 8,000. This year, flamingos offer us another visual feast," he added. He recommended that local and international tourists come to see the lake's colorful environment. Adızel said the basin needs to be more widely promoted in order to become better known among more people. He said that bird species living around the region are protected with a number of measurements imposed by the Van Governorship, and their numbers increase every year. Lake Erçek has the potential to become a bird haven with the support of the local people and cautious attitudes of hunters.
Last Update: Jul 22, 2015 11:08 pm
RELATED TOPICS