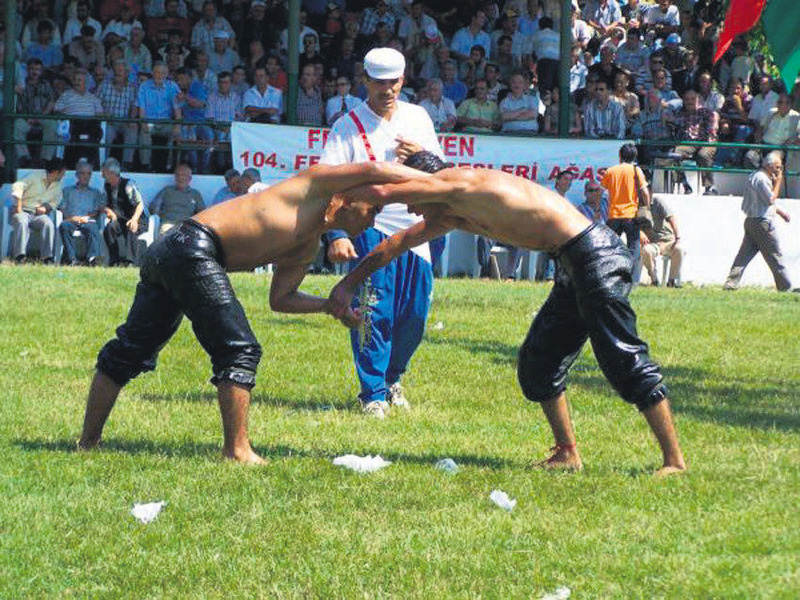 The Kırkpınar Oil Wrestling Festival will host champion oil wrestlers for the 654th time in Edirne. While wrestlers will try to win the Golden Belt, locals as well as guests from all over the world will enjoy the traditional festivities until July 26

One of the world's oldest annual sports events, the Kırkpınar Oil Wrestling Festival, was inherited from the Ottoman Empire and was recognized as intangible culture heritage by UNESCO in 2010. Held in the northwestern city of Edirne, the former Ottoman capital before the conquest of Constantinople, the festival has brought the most successful oil wrestlers of Anatolia together in July since the 14th century. This year, the festival, which began on July 20 with an opening ceremony, will witness hundreds of well-built men covered with oil wrestling under the hot summer sun in various categories. The champion oil wrestlers will take the field today at 25 Kasım Stadium and wrestle for two days until one of them is the last one standing and be awarded the Golden Belt.

Oil wrestling has been practiced since 2500 B.C. in ancient Egypt and other regions in the Middle East. Although the sport was popular in many different regions, the word "pehlivan," which is used to describe the champion wrestler, began to be used when the Parthians expelled the Greeks from Iran.

It is said that the first wrestling matches in Kırkpınar were held in 1360, during the early rule of the Ottomans in Anatolia and Thrace. As the legend goes, Orhan Gazi, the second sultan of the Ottomans, sent his son Süleyman Pasha and 40 other soldiers to Domuzhisarı to capture the fortress during his military campaign to capture Thrace. After capturing Domuzhisarı and some other fortresses, Süleyman Pasha became tired and decided to camp near a spring in Samona – located in present-day Greece. According to tradition, soldiers used to wrestle in order to pass the time during military campaigns. While the soldiers under the command of Süleyman Pasha were wrestling, two of the soldiers, rumored to be named Ali and Selim, could not beat each other after wrestling for hours. On the day of Hıdırellez, the two soldiers began wrestling once again in Ahırköy, 17 kilometers from Edirne. They wrestled for a whole day and at the end, they both died from exhaustion. Their fellow soldier friends then buried them under a fig tree.

Returning to the same spot after many years, the soldiers saw that a wide meadow and a spring had appeared where their two friends were buried. They named the area "Kırkpınar," which means 40 springs in English.

Although it is not as well-known, there is an alternative legend about the annual Kırkpınar Oil Wrestling Festival. It is rumored that the oil wrestling tradition began 100 years before the Ottomans captured Edirne. According to this story, the tradition was developed by a man named Sari Saltik, and Sultan Murat I embraced this tradition when he conquered the city.

Although the tradition of oil wrestling continued for centuries, the annual event was interrupted from time to time due to wars or other crises. In 1878, 1879, 1880 and 1888, the festival was not held due to the Ottoman-Russian War between 1877 and 1878. During the Balkan Wars, Edirne was captured by the Bulgarians so the festival and the oil wresting championship was held in Virantekke. When the Ottoman lands in Thrace were seized by the Greeks, the festival could not be held until 1924. Following the Turkish War of Independence, the new Republic of Turkey held the Kırkpınar Oil Wrestling Festival for the benefit of the Society for the Protection of Children in Sarayiçi, Edirne.

As it is a historical sporting event that dates back more than six centuries, the Kırkpınar oil Wrestling Festival has certain rules that have not changed much over the years. The ağa of Kırkpınar, for instance, is a very important aspect of the festival. The wrestling matches used to be supervised by ağas, and they were in charge of hosting the guest, festivities and the wrestling matches. Currently, the matches are supervised and the festival is organized by the Edirne municipality. However, every year, an ağa is chosen for Kırkpınar. Usually, the title goes to the person who makes the highest bid. The ağa of the 654th Kırkpınar Oil Wrestling is Seyfettin Selim who paid TL 552,000 ($202,770).

The winner of the festival is crowned as the başpehlivan and presented the biggest prize of the festival. The champion keeps the title for an entire year and if he manages to retain his title for three years in a row, he wins the golden belt. The record that Kel Aliço has been holding since 1922 has yet to be broken. As the records show, Kel Aliço won the title of başpehlivan 26 years in a row, which is a record that cannot be broken easily.

The outfit of the wrestlers is also a unique aspect of the Kırkpınar Oil Wrestling Festival. The wrestlers wear leather knee-high trousers called "kispet," which are made from the skins of water buffalo, calf or young buffalo.

It is no surprise that a sports festival as old as Kırkpınar is also accompanied by certain ceremonies. The oil is put on the wrestler in order to make the wrestling more difficult, and the oiling process comes with a ritual. The wrestlers put the oil on themselves around huge boilers filled with oil and water. The pehlivans first use their right hands to cover their left side of the body with oil as well as their kispet and chest before moving on to their left hands. Once the wrestling matches begin, the pehlivans are also able to get oil from the men who carry pitchers filled with oil.