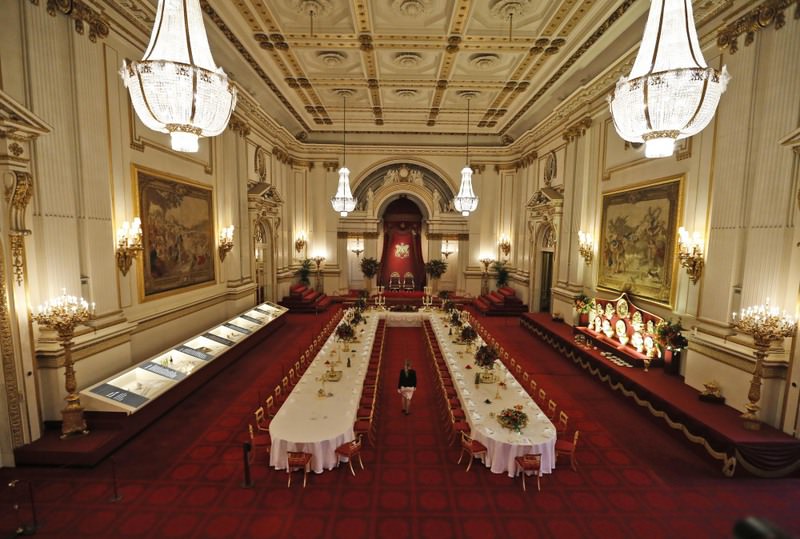 Britain's Buckingham Palace opens its doors again this summer, inviting the public to get a glimpse of the work that goes behind hosting a state banquet.

Following in the footsteps of statesmen from around the world, royal fans can enter the London palace through the grand entrance, where the Australian state coach used in the state visit processions is on display.

Up the staircase and into the opulent ballroom, visitors can see the dressed table for a state banquet, laid out with royal tableware and centerpieces.

"Visitors for the first time this year get to walk through the grand entrance," Anna Reynolds, curator for the Royal Collection Trust, told Reuters.

"Just as popes and presidents, astronauts, footballers, invited guests of the queen and other members of the royal family have done over the queen's reign."

The exhibit, "A Royal Welcome", also showcases recreations of the kitchen, cellar and dresser's workroom. Gowns worn by Queen Elizabeth for such banquets are also on display as are gifts from visiting statesmen. "We often get questions from the public about: Where are the cellars? Where is the wine kept? Where are the queen's hats kept? What happens behind the scenes?," Reynolds said. "We felt there was a real public interest in showing what we are showing in this display this year."

Buckingham Palace first opened its doors to the public in 1993 and the summer exhibition last year drew around 500,000 visitors.

The queen may have to move out of the 300-year old building under renovation plans being considered. A royal source said last month Buckingham palace needs around 150 million pounds ($232 million) worth of repairs, including fixing the roofs and replacing old wiring.
Last Update: Jul 27, 2015 1:47 am
RELATED TOPICS