After the outpour for Cecil the lion, American woman scrutinized for celebrating her killing of giraffe 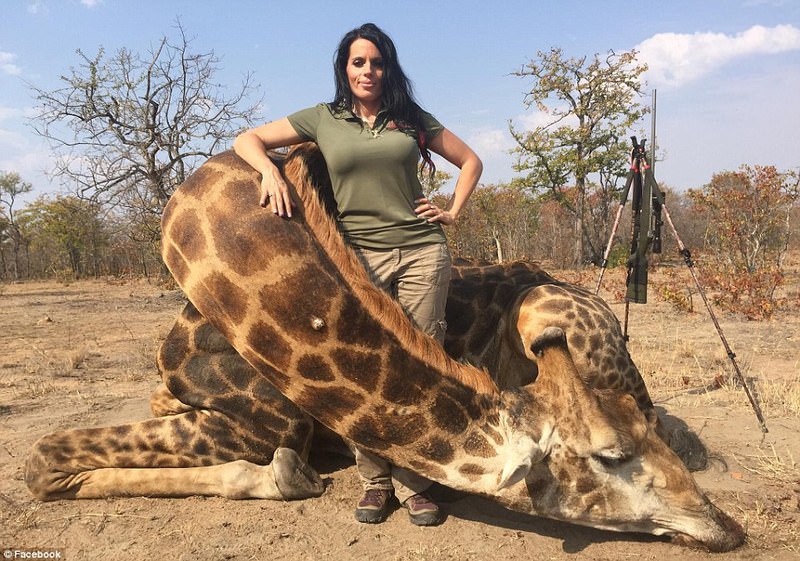 by Aug 05, 2015 12:00 am
A big-game trophy collector from Idaho has ignited a firestorm of criticism from animal-rights activists for flaunting online images of herself posed with the carcasses of a giraffe and other wildlife she killed during a recent guided hunt in South Africa.

"Everybody thinks we're cold-hearted killers and it's not that," Corgatelli said in the nationally televised interview. "There is a connection to the animal, and just because we hunt them doesn't mean we don't have a respect for them. Giraffes are very dangerous animals. They could hurt you seriously, very quickly."

Corgatelli first drew attention from a series of photos circulated via her Facebook account that showed her standing proudly with various animals she bagged in South Africa, including an impala, a warthog and a wildebeest.

"Day #2 I got an amazing old Giraffe. Such an amazing animal!!! I couldn't be happier," Corgatelli gushed in a caption to one image showing the slumped carcass draped around her.

Her photos and upbeat commentary were juxtaposed with a torrent of hostile remarks posted by viewers who "liked" her Facebook entries in order to weigh in with denunciations such as: "Shame on you for slaughtering innocent animals."

Idaho State issued a statement on Monday distancing itself from the controversy, saying it was not a university matter.

The outcry surrounding Corgatelli reverberated as fallout continued over the killing of Cecil the lion, with Zimbabwe's environment minister calling on Friday for extradition of Minneapolis dentist, Walter Palmer, 55, to face poaching charges.

Palmer has admitted killing the 13-year-old lion, which was fitted with a satellite-tracking collar, but said in a statement that he had hired professional guides and believed the required hunting permits were in order.

Ashley Byrne, a spokesman for People for the Ethical Treatment of Animals (PETA), said Palmer and Corgatelli have put the spotlight on expensive, guided tours overseas in which foreign clients are guaranteed a kill by local outfitters.

"These are self-promoting nobodies who pay a lot of money to travel the world to kill animals, just for thrills and to hang animal parts on their walls," she said.