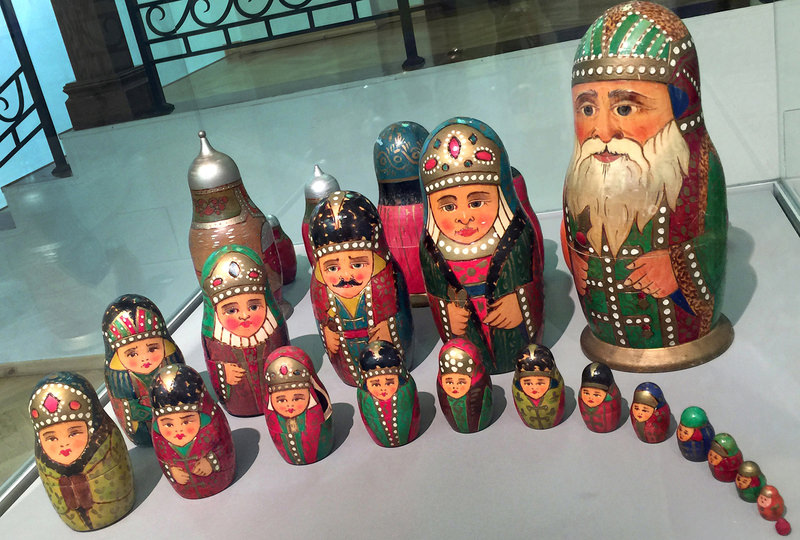 From cheery peasant girls in Tsarist times and Soviet-era cosmonauts to today's Pussy Riots, the changing face of Russia's matryoshka nesting dolls reflects the country's tumultuous history. For tourists, the dolls inside dolls that generally depict a buxom woman in a colored headscarf are a must-buy souvenir believed to date back to a centuries-old tradition, but a new exhibition reveals some surprises. For one, the initial idea behind the iconic wooden dolls, with small ones hidden inside larger ones, appears to have originated in Japan.

In the 1890s, when the Far East was all the rage with Russia's elite, well-known industrialist Savva Mamontov brought back a set of seven deities of happiness that inspired painter Sergei Malyutin to produce a Russian version - a peasant woman with all her children inside. The dolls caught on swiftly and were initially given a typical peasant name, Matryona, whose nickname is Matryoshka. At the 1900 Universal Exhibition in Paris, the dolls were an immediate sensation, winning a bronze medal. 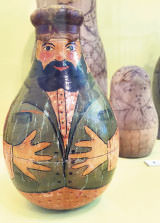 "In Russia, there's a matryoshka practically in every home," museum director Yelena Titova told Agence France-Presse (AFP). "You can say matryoshkas really reflect the Russian national character," as the dolls are a big part of a Russian childhood - teaching kids about culture and tradition.

At school, at around age 12, Russian children learn that matryoshkas "symbolize the Russian character, the Russian soul and the basic Russian values: Maternity, family, collectivism, unity and warmth," according to a guide for social science teachers. Titova curated an exhibition on the dolls called "No Simple Toy" at Moscow's Decorative Art Museum that ends mid-September and which captures their diverse reincarnations. A doll dating from around 1910 depicts a portly capitalist Frenchman in a top hat, while one from the 1920s shows a bearded "Kulak," a prosperous peasant driven out by the Bolsheviks.

After the Bolshevik Revolution, the dolls in the 1920s took a political turn, depicting workers in different trades, historical figures and even enemies of the people. In the 1930s, the state took over their production with factories set up in different cities. The exhibition has some dolls from Russia's far east along with others painted as Arctic Eskimos, highlighting the considerable size of the Soviet Union. 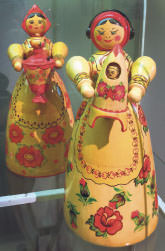 One even has dolls inside dolls from the Soviet Union's many different ethnic groups. The largest is a bearded Russian peasant, followed by his wife in a yellow headscarf, with figures from Ukraine, Belarus, the Caucasus and Central Asian nations progressively getting smaller. Under the Soviets, the matryoshka developed into a mass-produced souvenir, and by the 1950s they all looked similar - smiling and round-cheeked. "The basic look of the mass-market, commercial type of matryoshka became firmly fixed," Titova said.

But in the 1960s in the heyday of Russia's space program, several dolls paid tribute to Yuri Gagarin and other heroes of early space exploration. One set of 10 dolls at the exhibition wears yellow space helmets and comes in a rocket-shaped case.

In the late Soviet era, the dolls became more ornate, with brighter colors and outfits featuring large, stylized flowers. The emphasis was often on larger dolls with many more inside - 25 or more. The largest known matryoshka has 100 pieces, Titova said, while a standard matryoshka only has six to eight.

But the exhibition breaks off as matryoshkas entered the post-Soviet era. "Updating the collection in the 1990s was difficult," Titova said. Mass-produced dolls today feature sports teams or Russian and Soviet leaders or pop stars, but most are still traditional.

"Matryoshkas are nearly all the same," said Pyotr Kozlov, a journalist who designs matryoshkas, selling them online under brand name Duxovnaya Skrepa. His first design was a mustachioed "rainbow doll" painted in the colors of the gay pride flag.

He went on to create dolls wearing bright balaclavas, inspired by the punk group Pussy Riot, which led to group member Nadezhda Tolokonnikova posted pictures of Kozlov's dolls on her Instagram account. "My idea was to try ... to capture some trend - cultural, political or economic - that's appearing now and quickly create matryoshkas," he said. Last year, he created several dolls in camouflage, helmets and patriotic ribbons, representing the Russian forces in unmarked uniforms who took over Crimea. While the dolls should be "provocative," Kozlov said that they were meant "to present objectively what is happening in Russia."

Nevertheless, he said, some topics are simply too sensitive. "There definitely won't be any dolls about the Donetsk People's Republic," he said of Ukraine's war-torn eastern separatist region. "I think that's a topic we'll be working through for a long time."
RELATED TOPICS